Swell, but not Great

Playing pipe organs is nothing if not an exercise in adapting to unique and varying conditions. Every instrument is different. Most pipe organs, if they haven't been overbuilt or produced on a lavish cathedral scale, require their practitioners to exercise ingenuity in combining the available stops to create the colors, contrasts, and levels of loudness appropriate for the pieces they play.

Some instruments stretch the inventiveness of the organist more than others. Some that I have played actually don't stretch it enough. The one I have been privileged to play for the last 5 years, a 1972 Reuter recently restored by the St. Louis Pipe Organ Co., is one that in my opinion stretches the player's resourcefulness just enough. When I first auditioned on it, I told the hiring committee that it was the first time I had heard some of my old-warhorse pieces sound the way I heard them in my mind's ear. And not a rank of pipes was wasted!

Well, lately my ingenuity has been put to a sore test. It isn't the organ's fault, really. It's the large stained-glass window centered above the pipes on the rear wall of the nave. Decades of exposure to the elements, combined with some substandard leading, has caused this beautiful work of art to bow out to an alarming extent. In some places you can actually stick your finger through the gap between the leading and the surrounding stone. Not good. So, in order to get at this window, take it out for restoration and reinstallation, we have had to pull out all of the pipes from the center section of the organ. Which is to say, the foundation stops. Pretty much everything on the Great division of the organ, since the Swell is divided between two chests on opposite corners of the instrument.

At first, only the middle third of the Great was pulled out, including the Zimbelstern (which I hadn't had a really good look at before; it's really neat to look at). At this point I had 5 pedal stops, everything on the Swell, and except for the Krummhorn nothing above middle C on the Great, plus couplers. Really, once they took out the rest of the Great, it didn't make any difference. I couldn't use the middle-C-and-below portion of the Great for anything except pieces with a left-hand solo part, and really even then the likelihood was great that I would be missing notes needed for the solo. Or I could couple the Great to the pedal and play with both hands on the Swell manual. But for anything requiring a contrast between two manuals, or the full range of the keyboard, I was confined to the Swell, the Krummhorn, and 16' and 4' couplers for each. 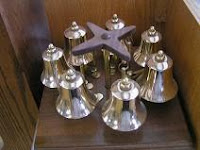 So, really, pulling out everything on the Great below middle-C didn't make much difference. My challenge for the past few weeks, then, has been to milk the Swell, five pedal stops, one soft reed and a variety of couplers for all they are worth. I've actually surprised myself with the variety of sound combinations I have come up with; and although very few of them are really useful for leading the congregation in song, some of them are more than marginally adequate. I do miss the foundation stops, though. And it has made my insides shrivel with embarrassment to see people look around to see what could be wrong with the organ, or the organist. This past Sunday, I used the fact that the choir was singing in a processional and performing an anthem at the front of the church (at late service only) as an excuse to lead both services in their entirety from the piano. But my insides shriveled again when, between services, several people asked with evident concern, "Will we have the organ for Easter?"

Yes, and no. The pipes that most give this instrument its characteristic sound as it supports corporate worship, the pipes whose voices provide the strongest and steadiest accompaniment to our voices, the pipes that furnish the foundation onto which everything that currently works on this instrument is added merely as color, will not be there. There will be an organ, yes. But it will not be the same organ. I have faced greater challenges to my ingenuity in pulling sound out of a compromised instrument--having played at least two pipe organs that were even more desperately compromised. And I have enjoyed and appreciated organs that had less to offer than my church's organ does even now. But I did not have to support public worship with those instruments, nor did I have to fill up such a large resonant space with them. Musically speaking, Easter will not come for this organ until the window is repaired, and all the pipes are put back, and it can once again rise to its mighty potential as a singing, praying, and preaching instrument.
Posted by RobbieFish at 9:11 PM