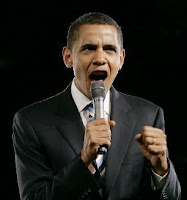 Well, the big day is tomorrow: a wide-open presidential election. Our country is about to make a choice between two big, scary unknowns. To be sure, we know a little more about McCain than Obama, if we care to study their record. We probably think we know a lot of stuff about them, where they will take the country, where the country is, good and bad, and which bits are due to Democratic policies and which to Republican ones.

My recommendation about what to do is very non-partisan. I don't care who said what about whom or why they said it. I am simply disgusted with the options we have to choose from.

We have, on the Blue side, a candidate whose nomination went over the heads of most voters in his own party's primaries, a candidate foisted on us by party bosses in defiance of the wishes of the rank-and-file; a candidate whose record is a big blank - oops, strike the word "big" - and whose unguarded comments, along with those of his running mate, raise spooky questions about what they plan to do if they get into power. 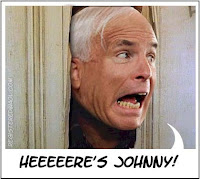 On the Red side of the race, we have an erratic, unpredictable character: the party maverick, whose record of disloyalty to his own party's central tenets raises even more questions. Does he have bipartisan appeal? Sure. But can he govern when neither party in Congress will owe him a debt of loyalty? God knows. And even though Sarah Palin has drawn a lot of positive notice to his campaign, it is a little scary to think that, if elected, she would be a heartbeat away from the Oval Office. Her airheaded, unguarded moments have added as much spookiness to this campaign season as Joe Biden's.

So my sage advice is: BOYCOTT THE ELECTION. I'm not saying that's what I'm going to do. But it does bear considering. We have such a crummy choice here that it just begs to be sent back to the kitchen with a snarky note to the chef: Eat it yourself, or shove it; just send us something else!
Posted by RobbieFish at 9:42 PM

Email ThisBlogThis!Share to TwitterShare to FacebookShare to Pinterest
Labels: politics