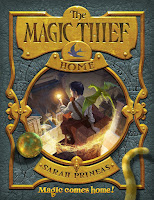 Despite having saved the city of Wellmet multiple times, young wizard Connwaer still hasn't figured out where he belongs. Starting when he picked the pocket of the learned wizard Nevery, he has transformed from a thief and gutterboy to perhaps the most important wizard in town. Nevertheless, not everybody is ready to give him credit for pulling himself out of the gutter. Conn understands, and can sort of communicate with, the two magical beings – something like dragons that have grown past the limits of their physical form – that provide power for all the magic done in town. But the two magics aren't settling down properly, and magic isn't working properly. But some of the local magisters – members of the council of wizards – still don't believe any of this stuff about magics being alive. And now someone is stealing the other wizards' locus stones, which they're all quite ready to pin on him. Worse, whoever it is may also be the reason the magics haven't settled, and if they keep up whatever they're doing, they could destroy the whole city – not that anyone believes Conn when he says so.

Most confusing of all, Conn's best friend is now the duchess, and she wants Conn to be her ducal magister. But that means forcing him into a position where he's sure he doesn't belong, and taking him away from a home where he fits, with Nevery and his servant Benet. With the magisters suspecting him of anything and everything, Rowan counting on him to help her balance the city's power, palace guards chasing him on the Sunrise side of the river and his cousin Ember keeping tabs on him in the Twilight, Conn feels boxed in right when he needs room to look around, figure out how to calm the magics and solve the mystery of the stolen stones. But despite scoring promising leads by talking with mudlarks and the chimney sweeps, the he doesn't discover true shape of what's going on until it might be too late to save the city.

Conn has been a wonderful hero to follow, and his adventures take place in a delightful, well-drawn fantasy worldscape. From his heartwarming and quirky relationships – including a tiny dragon he calls Pip – to the convincingly odd names of spells in the ancient dragon language, his creator shows tremendous imagination at a fine level of detail as well as world-building on a continental scale. At a range of either one book or a series of four, she also demonstrates the ability to turn a well-shaped story. Heck, she even (finally) persuaded me to learn the magisters' runes so I could decode the secret messages sprinkled throughout this book, a step I'm usually content to forgo. So, although this book brings many plot lines to a critical resolution, the only thing I would regret is not getting another chance to visit Conn's world.

This is the fourth book in the "Magic Thief" quartet, following The Magic Thief, Lost and Found. Sarah Prineas is also the author of several other YA fantasy and sci-fi titles, including Trouble in the Stars, Winterling, The Scroll of the King and more.
Posted by RobbieFish at 8:41 PM