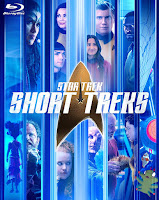 So, apparently Star Trek shorts have become a thing, and not just a fan-made thing but an actual, official, canonical, made-by-the-makers-of-Trek thing. Several of these shorts were included as DVD extras with Discovery Season 2 and Picard Season 1, and now a bunch of them have been released on their own DVD. And by DVD, in this case, I actually mean one disc. They're that short. Like, from 5 to maybe 15 minutes each.

The DVD actually doesn't include all 10 episodes of what the Powers That Be Trek designate as Seasons 1 and 2. It doesn't actually even say the word "season(s)" on it. It contains nine shorts, omitting the last Short Trek of S2, which (however) you can find on the Picard DVD: "Children of Mars." (That's the one where the mining droids go nuts and wipe out everyone on Mars.) Here is a quick listing of the shorts on the disc, observing that "Season 1" is the first four and the rest are "Season 2." Anyway, this review will end up running longer than one of these shorts unless I move directly to Three Shorts That Made It For Me. It's a tough choice, but here it is: (1) The Escape Artist, a hilarious installment in the antiheroic misadventures of Harcourt Fenton Mudd. (2) Q&A, which itches the spot that wants to see more about the upcoming Strange New Worlds series. (3) The Trouble with Edward, which is, again, hilarious. It's great to see Star Trek take itself a bit less seriously once in a while, eh? It'll also be interesting to see if they continue supplying us with these shorts, which are (at very least) a nice way to tide fans over until another plop in the (up to now) slow drip of Trek content.
Posted by RobbieFish at 3:19 PM