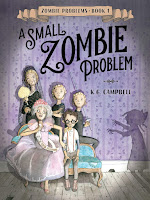 August is a lonely little boy, living in a crumbling mansion in a swamp, where the only person he ever sees is his slightly loony Aunt Hydrangea. She still wears the tiara and sash from when she won the Chili Pepper Princess pageant many years ago, and has a morbid fear of butterflies. This makes August's rare skin condition, which attracts butterflies to him, rather inconvenient. He's a rather odd child, himself, making skeleton puppets in his attic bedroom and spying on the wild child whose houseboat is moored to their boat landing. Barricaded in an old ruin, the pair live on the sales of the last few remaining crates of the hot sauce that once made their family rich, before the fortune went. Then one day, August tentatively ventures outside and without meaning to, changes everything.

Next thing he knows, he's been invited to visit an aunt and a pair of cousins he didn't know he had. They're a fairly strange lot, too, but rich with it. His longing for friendship and a sense of belonging go a bit to his head, and by the time he comes home, he has agreed to hunt for a long-lost family heirloom that his newfound Aunt Orchid desperately wants. But it turns out that he has unknowingly found it already, and it's not just a pretty gemstone – it has the power to raise the dead. That explains why an undead little girl has started following August around like a lost puppy. Now he's worried that if he doesn't shake Claudette off somehow, his chance to belong with his well-to-do cousins will be ruined.

It's a quirky and funny little zombie story – with surprisingly little running and screaming, and absolutely no brains-eating – but it nevertheless puts August through quite a dilemma. He learns an heartbreakingly painful lesson, which will make your heart go out to him. Though he doesn't always come across as perfectly nice himself, you'll understand what he's going through and appreciate what he learns from it. August's world is weird and different and has a definite atmosphere, a sense of happening in a real place, and an emotional resonance that I think will stand out in young readers' minds. And it will leave you curious about what August and his pet zombie might do next.

This is the first book of the "Zombie Problems" trilogy, continuing in The Zombie Stone and, due to be released in January 2022, August of the Zombies. K.G. Campbell is an author-illustrator who also co-created the children's picture book Wee Sister Strange with Holly Grant, wrote and illustrated Lester's Dreadful Sweaters and illustrated Kate DiCamillo's Flora & Ulysses.
Posted by RobbieFish at 7:33 PM