The Key of Lost Things

The Key of Lost Things
by Sean Easley
Recommended Ages: 11+ 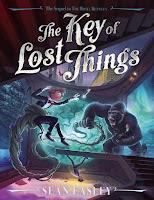 Cameron Kuhn and his friend Nico helped save the magical Hotel, whose doorways connect places all over the world, from the fiendish Mr. Stripe. Cam's reward is to be appointed Concierge in Training – an apprentice to the Old Man who runs the place. But Nico's reward, or rather his choice, is to abandon the hotel and now, it seems he has become its enemy – unleashing cats, putrid slime and other mishaps just as Cam is trying to prepare for an important gala. Actually, Cam isn't doing a great job as a leader; he doesn't trust his co-workers to do their part, micromanaging everything himself. But then again, old Agapios isn't around much to guide him, and the enchanted book he left to answer Cam's questions is getting less helpful by the day. It's apparent that something is wrong with the Hotel and it's getting worse, and by the time Cam finally accepts that Nico may really have turned on him, the news that Nico actually isn't the enemy he seems to be only leads to discoveries even more grim.

I've probably spoiled enough with that synposis, right there. There's lots more to this book, including Cam's growing pains as a brother to the fiercely independent, though physically challenged, Cass; as a son who's just starting to get to know his long-absent father, and whose faith in him has taken a serious beating; and as the wielder of a very peculiar magic in an especially strange world in which magics are practically people unto themselves. By the time he figures out what's really afoot, the threat to the Hotel – and to far more than the Hotel – has become so serious that it's hard to see how this series will move forward.

The magic is wild and strange, the character development and relationships full of emotionally affecting touches. The setting of the hotel and all the far-flung places it connects makes for some fantastic scenery and one insane chase scene. And the final push to defend everything that matters against Mr. Stripe is full of suspense and (if I may say so) tragic nobility.

This is the sequel to The Hotel Between by a Texas-based author about whom I know nothing more. Folks who enjoyed this book, including me, will be waiting on the edge of our seats for a third installment.
Posted by RobbieFish at 6:57 AM