Bear with me if I don't post very much for a little while. I'm really busy on a project. It's not a new project, either. It's the same old one – Useful Hymns, initially published in 2016 with hymn layouts that looked like this: 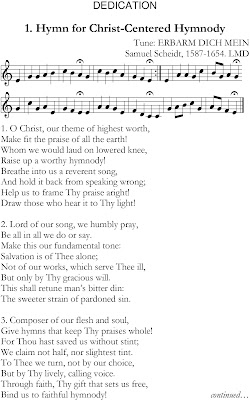 Only now, I'm reformatting it so they look like this: 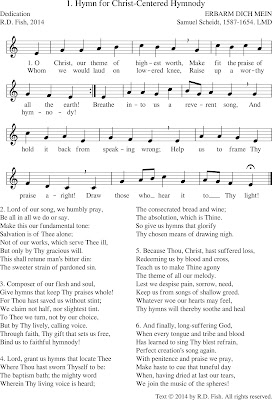 And oh, my goodness! is it ever a labor-intensive, complicated process. I finally feel like I have my feet under me and am making real progress, after banging my head against it every-which-way for a couple of weeks. So, I'm basically devoting every spare moment to it.

To clarify, what I did in the first book was type the melodies into Microsoft Word in the Melody fonts created in the last century by the brothers at St. Meinrad's Abbey in Indiana. The text of the hymns was just laid out like a poetry book, many of them running across multiple pages. My update, which I hope will make Useful Hymns more useful, involves a freeware scoring program called MuseScore, in which I'm actually setting the first stanza of each hymn to a line of melody and then arranging the remaining stanzas under it (and in some cases, on succeeding pages), saving space by breaking them into columns where possible. So, most of the hymns actually fit on one page, resulting (I believe) in a net savings in page count.

As I said, though, it's a lot of work and there have been a number of false starts and entire days of wasted labor. I finally seem to have a handle on it, and the process has also finally prompted me to bite the bullet and invest in Adobe Creative Cloud – at least, to use InDesign to set up the book. Also, I'm going to re-verify that I have all the permissions I need to reprint other people's hymns and hymn tunes that appear in the book. Thanks for your patience and do, do, do support my work by ordering the book on Lulu-dot-com when I announce that it's ready!
Posted by RobbieFish at 9:22 AM