Fun with the Apocalypse: Two Movies 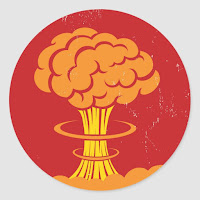 "How would you like your Apocalypse today?" That seems to be the question the entertainment industry should be asking us these days. We seem to crave spectacles set in a world worse off than the real one, or what's left of it after civilization has pretty much come to an end. And this has been going on for a couple decades. I wonder what this says about us – whether it shows our anxieties, or someone's preaching at us (but what could their message be?), or whether it just is what it is because people have noticed that it's fun and they'll throw enough money at it to make it worth Hollywood's while.

Now that I've dug thus far, I realize that you could pretty much amuse yourself full-time by watching or reading nothing but post-apocalyptic, dystopian and end-of-the-world-as-we-know-it stuff. I guess it makes it feel nice to go out in the sunlight and realize that you don't have to pay for the air you breathe, fend off brain-eating ghouls or expect a cannibal biker gang to come around the corner at any moment.

Enough prologue. I've run out of clever ways to bring together the reviews of two movies I enjoyed on video this week, which have in common the theme of adventure, black comedy and romance featuring former child stars surviving (kind of) in a post-fall-of-civilization world.

One was the zombie apocalypse trip Warm Bodies, featuring Nicholas Hoult (About a Boy, X Men: First Class, Mad Max: Fury Road) as a not-too-badly-decayed zombie who wishes there was more to life than shambling, moaning and trying to eat living people's brains. He shows sufficient initiative to stake out a home for himself on an abandoned airliner, collect memorabilia (including vinyl records, that he plays on a phonograph), and put together more than one syllable at a time. But things really start cooking when he spots Julie, the ex-girlfriend of the last guy whose brain he ate, and he starts to experience memories from the late Perry that begin to change him as a person.

He takes Julie under his wing and protects her from the other undead, albeit with an ulterior motive to spend more time with her while continuing to chew on Perry's brain. The more he and Julie fall in love with each other, the more human he becomes – which goes against the orthodox view that the only cure for a zombie is a bullet in the head. The changes spread to other zombies at the airport, or at least the more fleshy ones; the "boneys" don't like it one bit, which ultimately puts the corpses like R (that's as much of his name as he remembers) and the surviving humans on the same side for once.

Julie is played by Teresa Palmer of A Discovery of Witches; her father, a battle-hardened zombie fighter, by the great John Malkovich; R's zombie best friend M by comedian Rob Corddry (Hot Tub Time Machine), and the ill-fated Perry, by Dave Franco (Now You See Me). The whole structure of the movie worked for me. It made me laugh and squirm, sometimes at the same time. I like the weird way the cure spreads, the corpses' apparent struggle to say and do and feel more, R's frustrated internal monologue, and the touch of Romeo and Juliet but with (am I actually saying this?) a more realistic attitude.

Three Scenes That Made It For Me: (1) R asks M if he and the other corpses want to help him fight the boneys. The corpses groan. M says, "They say, 'F*** yeah.'" Corddry gets all the fun swear words; another example of this is when one of the human soldiers, aiming his gun into a corpse vs. boney melee, wonders aloud whom he should shoot, and M throws a boney at him and says, "That asshole." (2) Perry's death is pretty gruesome. It disturbed me for a long time. But the more human he becomes, the more R regrets killing him, until a point comes when he spits out a mouthful of his brains and you realize, if you haven't already, the direction this whole thing is going. (3) R walking in the rain, realizing that he hasn't felt cold like this since he became a zombie.

I guess what really makes it for me is that it isn't the zombie version of the "sparkly vampires going to high school and hooking up with human girls" trope that I was afraid it was going to be. It was so much weirder and more fun than that.

The other movie I added to my storehouse of "post-apocalyptic romantic comedies with gory action and former child stars" this week was Love and Monsters, starring Dylan O'Brien of the Maze Runner movies and TV's Teen Wolf series. O'Brien, who I think excels at the same kind of sarcastic, eye-rolling reactions to the ridiculous that made the career of Logan Lerman, does his thing in a world that, after being threatened by an asteroid strike, poisoned itself with nuclear waste (from blowing up the meteor with missiles). As a result, all the coldblooded creatures, from insects to fish, amphibians and reptiles, turned into enormous, man-eating monsters. Most of mankind was wiped out, and what's left lives in undergound bunkers where it's only a matter of time until too many monsters attack them to fight off.

O'Brien's character, a guy named Joel, freezes when faced with pants-pooping danger. So, his bunkermates pretty much just let him fix the radio and cook minestrone. He feels ashamed of being such a dead weight on them. Also, he's frustrated with being the odd man out, when everyone else has paired up romantically. So, he decides to walk 85 miles to the colony where his last girlfriend – who was separated from him when the monster apocalypse started, seven years ago – has hinted (he thinks) that she's still available. Everyone thinks Joel is going to his certain doom, but luckily he is soon joined by an intelligent dog named Boy and a couple of surface-dwelling survivors, who show him the ropes. Combined with his drawing ability, Joel kind of becomes an expert on surviving on the surface, just on time to save his ex's colony from ... well, that would be spoiling.

Despite the title, Love and Monsters doesn't lean very much on the romantic side. It's more of a survival story, with lots of action, cool creature effects, wonderful character moments including growth by its main character, and some touching moments that actually got me choked up. But yeah, lots of action, and (like the other movie) a hint that the hero, unlikely as he is, might actually change the world. I could definitely see myself re-watching this movie. By the way, the movie also features veteran character actor Michael Rooker (you'll know him by his voice).

Three scenes that made it for me: (1) As a giant centipede thing threatens Boy, Joel is forced to make up his mind whether to continue being Mr. Freeze Up While In Mortal Danger or to do something heroic. Kind of a turning point in the movie. (2) A robot sacrifices her last 15 minutes of battery life to keep Joel company in what I think may be the emotional heart of the movie; really a beautiful scene. (3) A tie between the one where Joel gets to use the grenade his survivalist friends gave him (you'll see) and the one where he puts into practice their advice to judge a monster's intentions by the look in its eyes. You may want less cryptic hints, but I think I've spoiled enough. Enjoy the end of the world!
Posted by RobbieFish at 10:29 PM