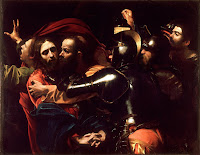 I make no apology for its being rather a long hymn. It is, after all, meant to be sung in a "first stanza, a different middle stanza for each installment, last stanza" format, with the middle seven stanzas deployed as the preacher chooses. So it's really not so much a nine-stanza hymn as seven three-stanza hymns who all share the same first and last stanza. This also gives me the opportunity to correct a shortcoming of the "Passion According to" formula, as it touches John's account, since the night of our Lord's arrest properly begins all the way back in John 13:1, where the evangelist tells us, "Jesus knowing that His hour had come that He should depart from this world to the Father, having loved His own who were in the world, He loved them to the end."

Hymn on the Lord's Passion according to St. John

Dear Lord, who knew Your hour was nigh
To leave this world, to reascend
The throne You'd never left on high,
And loved Your own unto the end:
Bind us as well, God's righteous Son,
Into the weaving there begun.

Betrayed by treachery and guile,
Your merest word could lay men low;
Yet You are willing, for the while,
Beneath the pow'r of men to go.
Rise, Caiaphas, and prophesy:
'Tis good that One for all should die!

Abased and questioned by the proud,
You answer their abrupt disdain:
"Ask synagogue and temple crowd
What I spoke publicly and plain."
Turn, holy cheek, receive their blows;
What men deny, God's justice knows!

Despite the heathen's cynic sneer –
"What is the truth?" – "Am I a Jew?" –
His conscience tells him, loud and clear,
There is no cause of death in You.
Yet Justice stands upon her head:
The mob demands a brute instead!

In mocking robes, with piercing crown,
You reign, unbowed by earthly scorn;
Men's madness all good motives drown
And Pilate's timeless shame suborn.
Behold, the sentence has been passed:
Our King and God, condemned at last!

They lead You to a refuse hill
And hang You, with two thieves athwart;
Above Your head, the mocking bill,
"King of the Jews," draws hot retort.
"So I have written," Pilate snaps,
While God's Word undergoes collapse!

All things fulfilled that God required,
In thirst and and agony You cry.
God's wrath, blood-sated, has retired;
You, Lord of all the living, die.
Oh, ravaged hands! Oh, ruptured heart!
What rest must from your stillness start!

And now we find Your body gone!
The women wonder how and where,
When on the third day, close to dawn,
They come and find Your grotto bare.
What does this mean, that You arise?
Just this: Our Savior justifies!

Now, sin's soiled bindings torn apart,
Death's yoke unchained, hell harried quite,
We know a Father's gracious heart;
We spy ahead a mansion bright,
Where Christ Himself, God's righteous Son,
Robes us in all that He has done.

UPDATE: Two fine composers have volunteered, each to write an original hymn tune for this hymn. All right, I dropped a hint in a hymnwriters' social media group that an original tune wouldn't go amiss – although I know of about 39 existing hymn tunes that would more or less fit these stanzas. I just didn't have any particular music in mind as I wrote this text, and I'm happy to be spared the trouble of having to choose between those 39. Nonetheless, I'm thrilled that not one, but two people felt inspired to join their notes to my lines. And now, just to give you an eyeful of how they go (mind you, these tunes are copyrighted, so please respect that and seek permission before using; however, harmonized arrangements are available), here they are:

Thanks. I learned it from reading lots of naval fiction.