In the past week or two, I've posted a couple of whimsical word coinages on Facebook:

Last night, or early this morning, I had a dream in which I subconsciously coined a new word – unless it's a foreign word that I'm not aware that I'm aware of. The latter has happened before, you know. I had a dream once from which I awoke and wrote down a marvelous line that I had heard coming out of my own mouth, thinking that a portion of it was just beautiful gibberish, only to realize in the morning that it was ancient Greek. (And before you go woo-woo, I studied Greek in college.) So, I'm not ruling out the possibility that this might mean something in a real language, but at the moment I can't find any evidence of that.

Then again, as this blog elsewhere bears witness, I have coined words before – I seem to remember "uplight" and "downlight" being among them – even sometimes in my dreams, such as "relect" and "prelect."

So, back to this morning's dream. I was listening to some guy with an Irish accent, who I believed to be a highly cultured person – maybe an author, like James Joyce or Patrick O'Brian – talk about horrible places he'd been to as a child. For imagery, I seemed to be looking at a slideshow of more or less abstract images illustrating the horribleness of those places. At one point, he mentioned the airport of a certain city in Ireland and added, with tones of disgust, a word that sounded like either ometha or olmatha – with accent on the initial o – then repeated the word with emphasis. At once, I understood that it was a rarely used but beautiful word that somehow combined the meanings "a ruin," "a shambles," "a labyrinth" and "a place whose ugliness traumatized me for life." It described somewhere badly designed, badly maintained, full of disorder and ugliness; a place where one could get lost and feel damned. 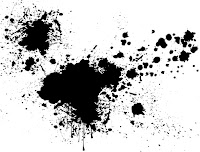 The image that went with the disembodied voice's description of yon horrible airport was something like this. Very helpful, eh?

So, I suppose, my imaginary Irish author friend may have been lamenting the brutality of brutalist architecture. But I awoke only a moment after his remark, still impressed by the vehemence with which he cried, "Ometha! Ometha!" I was so impressed that I got right up, though it was 5 a.m., and searched Google and Merriam-Webster for it, using various spellings. No luck. Can anyone tell me whether I dreamed this word up or whether it's really out there somewhere?

Posted by RobbieFish at 9:44 AM