Messiah: The Greatest Sermon Ever Sung 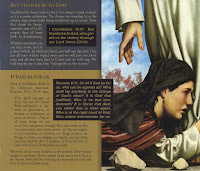 I couldn't find a decent-resolution picture of the front cover of this book online. It's just as well, because this excerpt is a fortuitously beautiful example of the kind of work you can expect from this book. Many years ago, I was horribly disappointed by a book titled Messiah: The Gospel According to Handel's Oratorio by Roger A. Bullard – a scholarly treatise that I picked up in a Lutheran college or seminary bookstore (I forget which) and that I hoped would go through the theology expressed by librettist Charles Jennens' choices (and adaptations) of Scripture for the lyrics of Handel's Messiah, and by Handel's musical treatment. Instead of that, the book took a great big, smelly, higher-critical dump on the Biblical texts used by Jennens and Handel – demythologizing this, documentary-hypothesizing that, and just generally making a case against the believing exegesis of Scripture in general and Messianic prophecy in particular.

The book I wanted to read at that time is now in my hands. As a bonus, it's written with incredible economy, at a layman's level (musically as well as theologically) by a faithful Lutheran pastor who happens to be nuts about Handel's Messiah. As another bonus, it's illustrated with breathtaking loveliness by an at-that-time starving artist who really got the theology the author was trying to get across. It's a Bible study wrapped in a music appreciation class, packaged in the dimensions of a children's illustrated board book – but like the oratorio it helps the reader understand, it's more than the sum of its parts. The Messiah is not, according to those in the know, Handel's best work; even Jennens thought so. But it's the piece that communicates with millions of people, generation after generation, on a profound level. It's the piece that hits you right there.

Read in alternation with musical examples (at a recent workshop on this book, Pastor Pittenger played his recommended recording (Christopher Hogwood conducting the Academy of Ancient Music and the Choir of Christ Church Cathedral, Oxford – a truly beautiful performance), the book is a refreshing supplement to what you already think you know about Handel's Messiah, which may not really be all that much. It is beautifully done, and that's even before you take in Mayer's stunning visuals, several of which deserve to be printed on an embroidery machine and hung as tapestries in your church. Or screened onto canvas and worked into an altar triptych, or something. I am full of admiration for this book, and that's not even getting into the story I heard at the aforementioned conference about the book being translated and used for evan- I mean, music appreciation classes in a country where that sort of thing must be done with immense care.

I'd like to tell you all about my trip to hear Pastor Pittenger hold forth about the Messiah a couple weekends ago at a beautiful Lutheran campus chapel at the University of Minnesota and all the other interesting things I saw, did and blew money on. But that wouldn't be to the purpose of this book review. I don't get out as much as I used to, and above all I don't get to share cultural and spiritual experiences as rich as a performance of Handel's Messiah as often as I used to. The chance to discuss these things with Pastor P. and others was a wonderful bleeding of the release valve for me, more needed than I would have guessed. But it's not all about me, you know. This book, with or without the presentation Pastor Pittenger seems to be willing to travel long distances to make, would be a wonderful topic of discussion for a Bible study circle, a book club, an art or music lovers' group or a larger organization (like, say, a circuit or district church workers' conference, women's auxiliary rally or doctrinal retreat). I think you'd be surprised at the quality of the insight it offers, not only into a piece of music that has perhaps been overplayed to the point many of us can no longer hear it, but into the faith it proclaims and confesses.
Posted by RobbieFish at 3:02 PM