It's time for the fourth annual Robbie Awards (or 11th, if you count retroactive awards), recognizing the best of the books I read during 2019. 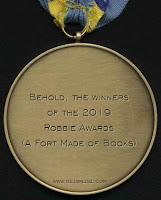 Not necessarily top-selling new releases – some of them came secondhand, many through the library – these mini-reviews represent my personal recommendations and were not, repeat not, sent to me for review by publishers, publicists or authors. (I wish.)

However, I did get the author’s autographs in a couple of them. Also, I got to interview author Peter de Jonge this year.

Why only 69 when I've been hitting around 100 pretty consistently? I blame it on TV-on-DVD binges. But I'm working on it and, with the blessing, I think 2020 will be a better-read year.

The nominees (imagine a drumroll):
And now the awards:

Critic’s Choice
I’m a critic, of sorts. I give my honest opinion when I review a book, and I recognize and appreciate quality in the art of writing. For beauty, power and mastery of literary techniques, I award this year’s Critic’s Choice to “As You Wish” by Chelsea Sedoti.

This young adult novel focuses on a boy named Eldon Wilkes as his 18th birthday approaches. On that day, Eldon, like everyone else brought up in his small town in the Mojave desert, is expected to enter a certain cave and make a wish that will certainly come true – then deal with the results for the rest of his life.

As he prepares for his wish day, Eldon researches what other townsfolk wished for and how it turned out for them. What he learns is horrifying enough, but he’s already spent his entire life living in a household poisoned by the unintended consequences of wishes. And although his parents, especially mom, expect Eldon to mend a family tragedy with his wish, he becomes increasingly certain that he doesn’t want to make any wish at all.

Carrying the consequences of “what you wish for” to the utmost, this strikingly original book takes the reader on a far-flung emotional journey, filled with ethical questions that will keep you thinking and feeling as you read. Meanwhile, you fall in love with the characters, squirm with their discomfort, forgive their flaws, struggle with their decisions, worry about their wellbeing and appreciate the slightly unexpected way everything turns out.

People’s Choice
I’m also a person, and like a lot of people, I value pieces of entertainment that take me out of my world and into theirs. For wowing me in 2019, my People’s Choice award goes to “The Doom Machine” by Mark Teague, which seems to be the only novel by a mostly children’s book author and illustrator.

It features a group of oddball characters caught up in the alien invasion of upstate New York in the mid-1950s. Including a boy who can fix any kind of engine (including a flying saucer’s) and a girl who can throw a baseball with deadly accuracy, the group is all that stands between earth and enslavement to the vicious, insectoid skreeps.

As period-piece science fiction goes, this book was a total gas. The aliens, even at their most loathsome, are kind of adorable. Touches of time travel and prophecy, details of an alien planet’s weird scenery and culture, smart dialogue with space pirates and a conflict over the fate of many worlds make it thrilling, touching, brainy fun from start to finish. I wish Teague would write more novels!

Kids' Choice
I’m still a kid at heart, younger inside than out. I’ve always read a lot of books designed for middle grades and young adults, but two that stood out this past year were actually aimed at small children. Of them, the winner is I Want My Hat Back by Jon Klassen.

Klassen’s perfectly structured book uses subtle variants of a few simple pictures, rearrangements of a few well-chosen words, and a clever bit that doesn’t actually have to be shown or stated, to pull laughter, irony and charm out of a silly tale of a bear searching the woods for his lost hat. It may also be just the thing to cheer up a child who is frustrated about losing a favorite hat, toy or whatever.

Best Comeback
This new year would be a great time to re-read The Selling of the President 1968 by Joe McGinniss. Alternately hilarious and horrifying, the book documents the innovative use of television to market Richard Nixon’s successful campaign for president.

Seemingly working from inside the campaign, McGinniss shows how carefully calibrated imagery and faux-spontaneous set-pieces snowed an entire country – or just enough of it to elect an obviously unsuitable candidate. It delivers laughs, chills and an important message for all media consumers.

If anything, its lessons are even more urgent today, when we have just-this-second journalism, targeted ads, machine learning and social media with few to no ethical filters. It’s proof that there’s a payoff for holding a long train of thought (like reading a piece of long-form reporting). If we don’t learn what this book can still teach us, I hate to think where we’re headed.

Best Newcomer
Everything I read this year was new to me, of course. As for the most promising debut novel by an author who shows signs of not being a one-hit wonder (cough Mark Teague cough), I feel this award belongs to Charlie Hernández & the League of Shadows by Ryan Calejo.

It's an exciting, spirited romp through the folklore of Spanish-speaking cultures. It features a street-wise Miami boy in search of his missing parents, helped by some strange allies and pursued by terrifying monsters. Along the way, his progress is hampered by outbreaks, not of zits (heaven forbid), but of feathers and horns.

You get all the fun of Rick Riordan's "Percy Jackson and the Olympians" series, plus you get to try out some Spanish phrases! Its sequel, Charlie Hernandez & the Castle of Bones, was released in October 2019 and will (I hope) find its way into my fist in 2020.

Best Documentary
In I'll Be Gone in the Dark: One Woman's Obsessive Search for the Golden State Killer, true crime maven Michelle McNamara does deep-dive journalism into a cold case about a creep known at the time as the “Original Night Stalker,” who raped some 50 women, murdered 10 people and terrorized a large swath of California, on and off, from 1976 to -86.

By the time the killer was caught in 2018, McNamara had died at age 46, leaving this book unfinished. Other writers, including her husband, comedian Patton Oswalt, filled in some missing pieces to complete the book, based largely on a series of magazine articles by McNamara and her unpublished notes.

The authorities deny that McNamara found any new facts that helped them capture Joseph DeAngelo. But it seems likely that her crusade, online and in print, spurred law enforcement to keep devoting resources to the case and re-examining the evidence.

Her deep sympathy for the crimes’ victims and their grieving survivors is evident, and it stirs similar feelings. It makes both her and them real on a personal level. I only know McNamara from reading this book, and yet somehow I miss her.

Best Audiobook
Out of a small list of candidates, I’m going to go with The Rosie Project by Graeme Simsion, read by Dan O’Grady.

It’s the beginning of a series of books about an Australian geneticist whose personality is wired differently from most people’s – he seems to have something like Asperger’s syndrome – and who is about to give up on ever finding the love of his life when a psychologist friend suggests approaching it as a research project.

Don Tillman puts together a scientific study, including a questionnaire to filter out unsuitable applicants. Just when some promising data starts coming in, he encounters a random variable – a graduate student named Rosie. Even though everything about her goes against his notion of the ideal mate, he can’t stop thinking about her.

Cue an outrageous and romantic comedy of errors, in which the narrator himself misses the irony that permeates his point of view and everything builds to a sweet climax. O’Grady’s voice acting has just the right comic touch, enhanced by a down-under accent and a firm but not unkind grasp of the main character.

Best Graphic Novel
Taking the place of last year’s Short Subject award, this category represents only a small handful of books I read in 2019. Nevertheless, I think The Last Kids on Earth by Max Brallier, illustrated by Douglas Holgate, deserves a plug.

A funny, monster- and action-packed tale of teens surviving a zombie apocalypse, it alternates between comic panels and prose. The art and the writing share the same kind of youthful goofiness.

Jack, the hero kid, imagines himself as more heroic than he actually is, which adds laughs to the thrills. Joining him in a street-to-street battle against the walking dead and worse are his nerdy best friend, his ex-bully (who, Jack finds, is nice to have on his side) and the girl he dreams of saving, but who is pretty good at saving herself.

It’s part of a five-book series that I grew tired of seeing in a store’s book aisle and finally decided to try. I’d recommend it for kids who need encouragement in reading.

Best Art
For the most beautiful book art, my vote goes to Messiah: The Greatest Sermon Ever Sung by Tony Pittenger, illustrated by Jonathan Mayer.

I recently traveled to the Twin Cities to attend a two-day retreat in which Pittenger, a Lutheran pastor from the Seattle area, played a recording of the Messiah and paused every few tracks to discuss his book, along with Mayer’s spectacular artwork.

Pittenger’s words study of how George Frideric Handel and his librettist, Charles Jennens, used Bible selections and musical symbolism to bear powerful witness to Christ – laying out our world’s need, God’s promise and its fulfillment from the beginning of the world to the end.

It’s the book about Handel’s Messiah that I’ve been looking for all my adult life, even before Mayer’s art takes it to a new level. One image alone – a slaughtered lamb whose blood forms a map of the world – has become a permanent exhibit in my mind’s gallery; many others are just as excellent.

Till we read again, happy book hunting!
Posted by RobbieFish at 12:27 PM

Reminder to self: Consider Rick's list of books he most enjoyed in 2019.