Back when I lived in an area served by a classical music radio station, I became a power-player in the game of Name That Composer. To help you achieve a similar level of success, here are some of the cheats, I mean rules, I played by. These are only some of the mental shortcuts that helped me maintain a high score. For many composers, however, there is no substitute for simply listening to a lot of their music. 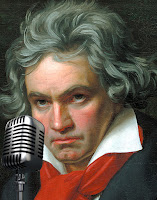 Rule 5. If it sounds like Sibelius, it's Sibelius. Nobody else wrote music that sounded like Sibelius.
Exceptions: Early Lars-Erik Larsson and Luís de Freitas Branco.

Rule 6. If it drips with Central Asian exoticism, it is probably by one of a handful of Russian romantic composers. But no matter who is credited with writing it, Rimsky-Korsakov most likely meddled with it.

Rule 7. If it turns out to be an early symphony or orchestral suite by Bizet, Gounod, Massenet, or Holst, your classical radio station sucks. Someone should tell its programming director to play significant music.

Rule 8. If it fills you with an urge to dance,
Rule 9. If it bores the daylights out of you,
Rule 10. If it sounds like the aural equivalent of an impressionist painting,
I might add more rules in a later post, to deal with genres other than "what sounds like a symphony."
*...although, I suppose, he didn't write much that sounds like a symphony - unless you count Piano Concertos.
Posted by RobbieFish at 10:48 AM