I tried to make a ratatouille for a church potluck this past Sunday. Not the movie "Ratatouille" version with alternating thin slices of eggplant, zucchini, yellow squash, and Roma tomato fanned out in a spiral formation in a baking dish and broiled in a piperade, but the Emeril version with the ingredients cooked al dente in a pot on the stove. Also in the recipe are sweet peppers, onions, garlic, rosemary, thyme, basil, salt and pepper, a dab of olive oil to start, and a goodly squirt of lemon juice to finish. It's one of those recipes that makes you feel like you're really cooking, because of the amount of time you spend slicing things before anything goes into the pot, and because there's a precise order of battle as to what goes into the pot and when.

I've been making it long enough to do it without looking at a recipe, and it turned out rather well, except that I got a little overenthusiastic with the fresh thyme and rosemary. That, and the fact that some people apparently expected there to be some kind of meat in the dish, perhaps explains why only a couple people at the potluck tried it. I ended up with a potluck-sized potful of leftover ratatouille, which I am still eating at home.

Last night, to shake things up, I decided to combine one of the few dishes I make from all-fresh ingredients with an old bachelor-chow standby, boxed shells-and-cheese macaroni - the kind with the packet of ready-mixed cheese sauce that you can heat up in the same boiling water as the noodles. I've combined a lot of different things with boxed shell or elbow mac and cheese; things everybody has tried, like tuna, peas, and cream-of-mushroom soup, or canned chili without beans; things most people would know better than to stir in, like leftover spaghetti sauce and meatballs; and things few people have even thought of adding, like Italian clam sauce or a spicy Indian entree. Most of these mixers are pretty much on the order of adding junk to more junk. But it turns out that adding homemade, leftover ratatouille to the shells-and-cheese both elevated the mac and broke the monotony of a week of eating a stew of perfectly cooked but over-seasoned summer vegetables. 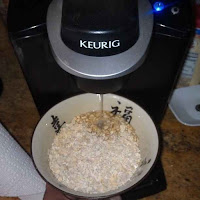 While I'm confiding my culinary transgressions, here's another bachelor chow tip I just discovered this week: You can make instant oatmeal with the Keurig machine in your office's break room. First, empty two serving-size packets into a soup mug (because, face it, one is never enough); put the mug under the nozzle of the K-cup machine. Then, whatever your Keurig model requires to get it to run 4 ounces of hot water into the mug, do that twice (once for each packet of oatmeal). Stir and let stand for a couple minutes. It's actually faster, less messy, and tastier than the microwave way that you, I, and the wall have been practicing lo, these many years.

Based on this picture, I am apparently not the first person to realize this. But if you're behind me on the Keurig learning curve, you're welcome.
Posted by RobbieFish at 8:05 AM