The Shadow Cadets of Pennyroyal Academy

In this second installment in the Pennyroyal Academy series, a princess cadet named Evie - who, a year ago, didn't even have a name, and had no memory of living among humans - makes further strides toward becoming the Warrior Princess destined to save a land full of fairy tale kingdoms from a plague of witches. Yeah, so it's sort of another story about a whimsical, magical school, featuring a student who is more or less the "chosen one," marked by a prophecy to defeat a great evil. But this school trains not witches and wizards, but princesses and knights. It's a really exacting career path; only a small number of each year's new recruits makes it all the way to being a Princess or Knight of the Shield, tasked with defending the realm from dragons and witches. Their training has to be tough, because it's life or death out there; every year, a couple kingdoms fall to the rising power of evil. The courses of study include poise and manners, riddles, survival in an enchanted forest, and how to escape from a booby-trapped castle. The teachers include a princess who was cursed into the form of a goat, a daft biddy who constantly confides in a rooster (not the talking kind), and a swarm of Fairy Drillsergeants.

What I'm saying is, it's Hogwarts as re-imagined by a brony - a word which here means "a grown, heterosexual man who is totally into My Little Pony." I'm serious. This is a thing, and this guy is one of the big names in the movement. Primarily a TV writer before he started writing this series, Larson describes himself as being to his wife and daughters what Princess Cadet Basil (a boy) is to the other members of Leatherwolf Company. Basil wouldn't like you to think about him the way you are probably thinking about him right now. Aspiring to be a princess wasn't his choice; it was thrust on him by his mother, perhaps as a way to console herself about having 22 sons and no daughters. He's a totally decent guy who can kick anyone's butt in a sword fight. The whole concept of Princess Basil 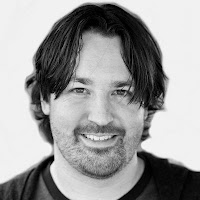 (like the concept of M.A. Larson being a man who looks like this, -->) is one of the things that makes this series simultaneously funny and weird to wrap your head around. And that unique approach to being fun, interesting, offbeat, and girly in a way that a guy can totally enjoy, is what puts this Hogwarts knockoff on a level of its own.

In this second installment, as I was saying, Evie goes back for her second year at Pennyroyal, is challenged to her utmost, and heroically rises to the occasion when a Warrior Princess type is just what is needed. This time, there is more to worry about than witches and dragons (not to mention the fact Evie was raised by dragons, and doesn't like the idea of slaying them). No, it turns out there is also a secret society of ex-princess cadets who grew bitter about being sent home in failure. When the headmistress of Pennyroyal won't listen to Evie's concerns, she realizes it's up to her to head off an invasion by a horde of killer princess wanna-bes. To succeed, she must pull her circle of friends back together after a year of strain on their relationship. She must also rely on a sister she learned she had only last year - a sister who, by the way, is only the most powerful witch ever to be born. And, of course, she and her friends must find in themselves the courage, the compassion, the discipline, and (in Evie's case) a little something extra, to stand up to the greatest danger they have faced yet.

Evie's growth as a princess is inspiring. Her interplay with the other characters is full of fun, and at times, very touching. And her second year of adventures, while fully engrossing in itself, also continues building the anticipation of an exciting destiny to come. The series continues in The Warrior Princess of Pennyroyal Academy, scheduled for release Aug. 22, 2017.
Posted by RobbieFish at 7:16 PM