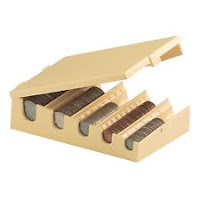 I've got one of these things. According to the website where I found this picture, it's called an MMF Industries Compact Coin Organizer. I just call it "that coin rolling thingy in my top-left desk drawer." Combined with a supply of paper tubes designed to hold standard rolls of U.S. metal money, this thingy helps me control the tendency of really hard currency to form drifts in the lee of high-traffic areas around my house. It also gives me a wonderful feeling of unexpected wealth when, once in a great while, I am able to roll enough coins to, say, top off the gas tank in my car, or buy a half-price milkshake after 8 p.m. at Sonic. Finally, it provides me with endless fun at the expense of the air-headed, entry-level cashier whose eyes show white around the edges when I hand them a paper tube of coins in exchange for a McDonald's value meal. "What am I supposed to do with this?" they routinely ask. "I'm going to have to ask my manager for help." If I dared, I would try spending some of my $2 bills. But I'm not in any particular hurry to be arrested on suspicion of counterfeiting.

Coins tend to accumulate with me because, when I spend cash, they go straight into a pocket in my pants and, other than once in a while, don't come out again until I get home and have to empty out my pockets. Then the coins get tossed into a jar, or a slot in a desk drawer, or (if I'm really on top of things) into the aforementioned thingy, never to emerge until I'm short on cash and need to dig up a few dollars worth of quarters for a late-night run to Sonic. Leftover quarters from the bill-exchanger at the laundromat tend to even things out after laundry day. Eventually, the jar begins to overflow, or the slot in the drawer becomes too full of money to let me close the drawer anymore, so I have to do some coin rolling. And that's when I start thinking vague thoughts about mathematical ratios.

I find it endlessly interesting, how certain denominations of coins accumulate faster than others, over a longish period of random mercantile transactions. I go through certain sizes of coin-rolling paper faster than others. Much faster, even. So, while I have nothing else to occupy my mind during the tedious chore of rolling coin, I have worked out some mathematical relationships relevant to "rolling your own." And I think these ratios would probably stand up to some scientific testing. To test them, however, would probably be really tedious, if not impossible in the real world. Maybe it's best to leave it up to a thought experiment. It goes like this:

Suppose you made all your retail transactions for a year in cash, using paper money only. Ideally, you're getting back the least number of each type of coin necessary to make your change. Whatever coins you got back, you stashed in a jar at home at the end of each day. You never accepted a cashier's offer of a free penny from the dish next to the till, to round your purchase up to the nearest dollar (or quarter, or nickel, or whatever). Nor do you chuck pennies into said dish.

Frankly, to do this with anything like scientific rigor would require a fanatical devotion to accepting exact change back, and only exact change, but never providing it from your end. The idea would be to get a random number of cents back for your purchases, and to see what all this randomness leads to after a while. This could make riding city buses a really awesome challenge; I don't know how you would deal with a situation where the vendor won't give you change back. Making similar purchases multiple times at the same store might also skew the results. Your cashier's till running short of one denomination of coin, requiring him or her to give you (for example) extra nickels to make up for a lack of dimes, might throw things off, as might an inexperienced doofus at the till, not giving back the correct coins for each number of cents due you; though I imagine even this should even out in the wash. Tipping waiters or waitresses, etc., might require some serious arithmetic skills to ensure they get just the 15 or 20 percent you want to tip them, not a penny more or less. But let's pass over this and look at the results I would anticipate.

Long Story Short
My prediction is that you would end up with approximately 15 quarters : 6 dimes : 4 nickels : 20 pennies, when you reduce the grand total of each type of coin to lowest terms. And because it takes 40 quarters or nickels and 50 dimes or pennies to complete a roll, these proportions would translate (again, in lowest terms) to 75 rolls of quarters : 24 rolls of dimes: 20 rolls of nickels: 80 rolls of pennies. So, allowing the manufacturer to throw in an extra dime-rolling paper for good measure, a well-proportioned bag of rolling papers would have 15 papers of quarters for every 5 of dimes, 4 of nickels, and 16 of pennies. Or, if the manufacturer would prefer to give you one additional paper each for nickels and pennies, he could sell a reasonably well-proportioned bag for making 25 rolls of quarters, 8 of dimes, 7 of nickels, and 27 of pennies.

That sounds a bit counter-intuitive, but watch the coins pile up in real-world practice and it won't seem so far-fetched. To be sure, there will be some error, due to conditions like, say, the fact you stop for coffee and a bagel twice a week at the same shop, and always pay the same amount, etc. But let's drill down into how I got these numbers. 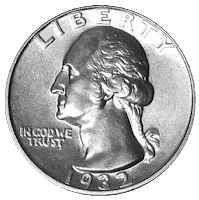 Quarters
An American quarter is worth 25 cents, or one-fourth of a dollar; hence the name "quarter." Duh. How many quarters should you get back in a year's worth of cash purchases, on average? My thinking goes like this: There are 100 possible numbers of cents after the decimal point in the amount of money you should get back for any cash purchase, from 0 cents to 99 cents. You'll get back exactly one quarter for every number of cents from 25 through 49; two quarters from 50 cents to 74; and three quarters from 75 to 99 cents. That means you'll get exactly one quarter 1:4 times, exactly two quarters 1:4 times, and exactly three quarters 1:4 times. You'll get back at least one quarter 3:4 times, and at least two quarters 2:4 times. Supposing you got each combination of change back, from 0 to 99 cents, exactly once each, you would receive a total of 150 quarters. 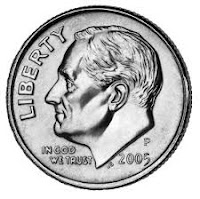 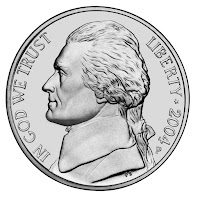 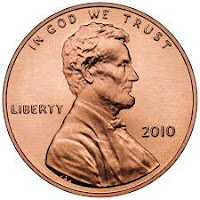 Pennies
The penny is one cent, one hundredth of a dollar. This worthless little coin, which is literally worth less than it costs to make and doesn't have the buying power to buy anything by itself, will accumulate like gangbusters. Your chances are 1:5 of getting either exactly one, exactly two, exactly three, or exactly four of them in any transaction; 4:5 of getting at least one; 3:5 of getting at least two; and 2:5 of getting at least 3. I reckon this adds up to a return of 200 pennies out of every combination from 0 to 99 cents.

Whew. Now I can stop thinking about that. Now what will my brain do while I'm performing the mindless chore of rolling spare change?

Well, I've already got an answer to that. It's the question of what we should replace the above coins with, now that the value of the U.S. dollar has shrunk to the point where there's almost no point keeping track of amounts of money this small. But that's a story for another day!

Posted by RobbieFish at 2:21 PM