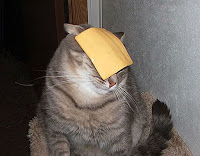 I've been fostering, and may possibly end up adopting, an adult cat that belonged to a neighbor who had to enter an assisted-care facility. Her name, for what it's worth, is either Priss or Prissy, short for Priscilla (not my choice, but oh well), and she is extremely black.

I'll tell you later how she's getting along with my senior cat Sinead, and what I think about having two cats in the house again, after finally realizing after 14 solid years of two-cattedness that one is the ideal number of cats to live with. But that's not what this post is about.

The late Tyrone was often mistaken for a black cat, though I always hastened to make it clear he was really dark gray - in fact, he was a couple different shades of dark gray, with tabby markings that only showed up under certain lighting conditions. Priss, however, is truly, madly, deeply black - so black, with kind of a matte finish, that even with a light shining directly on her at close range (for example, from the lamp on my bedside table while I'm combing her coat on the bed), it is sometimes difficult to see her in any detail beyond a cat-shaped shadow.

This bizarre phenomenon made me realize that our language has a crying need for two words that, to my knowledge, I am about to coin for the first time right now: "uplight" and "downlight." The conditions in which I can look at Priss and have trouble seeing anything but a black blob, even when I'm right beside her and there's a bright light aimed at us from a few feet away, are what I would describe as "uplight" - i.e., the cat is between me in the light; I'm looking at her uplight, with the angle of light casting hear near side at least partly in shadow.

The problem goes away when I'm viewing the cat downlight, when the angle of light is such that the cat isn't mostly between me and the light source. Then, particularly after being combed and petted and perhaps treated with a little kitty conditioner, her fur gleams and the light brings out her features.

On a related topic of perhaps paradoxical sensory discoveries, I tried an experiment for lunch yesterday: on one sandwich, I put a little ham, a little bologna, two generously proportioned strips of extra-sharp cheddar, and a couple of those individually-wrapped squares of floppy orange "American cheese," all between two pieces of Italian-style bread with not-quite-mayo salad dressing. And what do you suppose was the flavor that cut through everything and dominated the taste of that sandwich? It wasn't the salty, smoked ham. It wasn't the tangy salad dressing. It wasn't even the sharp, aged cheddar. It was, believe it or not, that bland, pedestrian, "imitation American flavor pasteurized process cheese food" that drowned out everything else.

It reminded me of that time, years ago, when I put a drop or two of sesame oil in a bowl of hot chili-flavored ramen-noodle soup - the kind of soup base that makes sweat pour down your face and that leaves the membranes from your lips downward on fire with a stinging sensation. Guess what? The soup totally left my membranes on fire and my face covered in sweat, but the only thing I could taste was the nice, mild, nutty flavor of sesame oil. It drove home the fact that a flavor can be perceived as mild, or even bland, yet at the same time be an incredibly strong flavor, while one that comes across as sharp, pungent, or even painfully spicy, might actually be very weak in terms of pure taste.

Another thing to learn from two slices of American cheese is that something can be all but disgustingly smooth, while at the same time not being slippery at all. There is something about the unnaturally smooth consistency of American cheese singles that gives me a slight shiver, yet at the same time, you can't rub two slices of them together without the pieces immediately sticking to each other. You can't run a slice of this stuff across a clean plate without the friction grabbing it and practically welding it to the plate's surface. It's like one of those transparent plastic decals that looks like it should be smooth, but that will cling to a glass window until you scrape it off with a razor-blade. The smoothness is all in the consistency of the thing, its internal order; the friction exists, apparently, on a microscopic order on the object's surface.

All these little paradoxes of everyday science leave a body as curious as a cat. Hopefully the curiosity won't, like, kill me.
Posted by RobbieFish at 3:17 PM