How I Woke Up This Morning 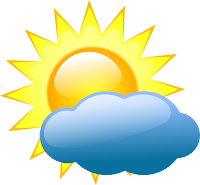 At 4:17 a.m., I was awakened out of an engaging dream by the distinct sound of a woman's voice in the next room, calling my first name.

It took me a few minutes to gather up the presence of mind to realize it was very unlikely there was anyone in my living room at that hour, after which I was able to verify there was no one there. It then occurred to me that very few women who know me locally would call me by my first name, in a community where nearly everyone knows me as "R.D." (This is in an area where I moved two years ago when I was hired to work at the same newspaper office as my dad, who has the same first name. So unofficially, but effectively, I changed my name to the initials to make it easier to distinguish between us.)

While the dream - I quickly decided it was that - was still very vivid in my memory, I thought about who I know who has a voice like the one I heard calling my name. At first I was inclined to consider a teacher at one of the local schools. I finally decided it was most like the voice of the local agent who sold me my health insurance. A very clear, assertive, carrying voice in a mezzosoprano range. And I suppose my insurance agent must know my real first name, since I use it when I fill out important paperwork. But she was no more likely to be in my living room at 0417 Central than anybody else who knows me by name, and I doubt that my hallucination of a voice like hers indicates any kind of wishful thinking on my part.

It was a creepy dream. Even after I had explained it away to my own satisfaction, I had trouble settling down to sleep again. After a while I gave it up, turned off my wake-up alarm, shaved, ate breakfast, and puttered around, looking for some way to blow time until I had to go to work.

At last, around 5:30 a.m., I decided I might lie down for a nap. I fell right asleep and started having more dreams, none of which I remember except for the very last bit. That's when a "mostly sunny" graphic popped up in the lower right corner of my dream, accompanied by time and temperature indicating it was 6:45 a.m. I dismissed it, reasoning that my alarm would have gone off if it was really that time... but a minute later I asked myself, "Did I re-set my alarm after I turned it off?"

I opened my eyes and looked at my alarm clock. It read 6:46 a.m., and the alarm was turned off.
Posted by RobbieFish at 7:16 PM

Email ThisBlogThis!Share to TwitterShare to FacebookShare to Pinterest
Labels: dreams