What Causes the Church?

This evening, at the beginning of a choir rehearsal at the chapel of Concordia Seminary in St. Louis, I leaned over to a younger guy—a Lutheran Church–Missouri Synod seminarian—who had worn his hat into the rehearsal, and I said something to the effect, "Hats off, boyo. This is church." He scoffed, "It's not a church. It's a chapel."

Later, during a break in the rehearsal, we continued our discussion with this very brief exchange:

ME: "What about the altar where the sacrament is celebrated?"

That's about as far as our actual conversation got. Though I noted, later in the rehearsal, that Sunny Jim had taken his hat off, I spent the rest of it distracted by a desire to pull him aside and disabuse him of some of the Waltherian poppycock to which I no longer have to give lip-service. Since I couldn't actually button-hole the kid during or after the rehearsal, all I can do is imagine how our conversation/catechism might have gone... 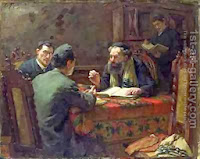 ME: Are you saying it only qualifies as a house of God if it belongs to a properly constituted congregation with a called pastor?

ME: So it stops being the house of God during a pastoral vacancy?

HE: Of course not.

ME: So then it can be the house of God even if there isn't a called pastor?

ME: Never mind about that. What constitutes a properly constituted congregation?

HE: (Probably some fiddle-faddle boiling down to the sovereignty of the voters' assembly.)

ME: So man creates the church? By a resolution moved, seconded, and passed by a majority vote?

ME: Don't the Lutheran confessions teach that God creates the church, using the preached Word and the Sacraments as His means to do so?

ME: So isn't it true that Word and Sacrament cause the church?

HE: Yeah, but no one has the right to preach the Word or administer the Sacraments without already being rightly called.

HE: Called by the church.

ME: Called by God, through the church.

HE: So the church causes the office of the keys, or the ministry, which proclaims the Word and administers the Sacraments.

ME: Which cause the church.

HE: No, God causes the church. The sacraments are only God's instruments.

ME: God causes the office of the keys, too, and calls the pastor. The external structure and ceremonies by which pastors are assigned to congregations, such as the voters' assembly—to name just one example—are likewise only instruments God uses. The specific form of these structures and ceremonies is determined by human right, not commanded by God. But the pastoral ministry, the Word, and the Sacraments come directly from God, in Christ.

HE: God gives them to the church.

ME: For the church to be the church, it must have them. The preached Word, the Sacraments, and the Office of the Keys are the marks whereby the church can be seen to exist. Where God gives them, there He creates the church.

ME: So we're back to the original question: What causes the church? How does a "properly constituted congregation" come into existence, so that it has a right to call its own pastor?

ME: Show me where this is written in the Bible.

ME: How about the Lutheran Confessions?

HE: The Confessions don't answer every question that has arisen since 1580.

ME: You have to be getting this from somewhere. Where is it coming from? Who sold you this bill of goods?

HE: It's the doctrine of church on ministry on which the Missouri Synod was founded. You don't like it, you can worship elsewhere.

ME: I already do. So do you mean to say that the Word and Sacraments require validation from the congregation, however it may be structured? Even though that structure exists by human right only?

HE: Hey, take it up with God. He works through means.

ME: Exactly. And through the means of Word and Sacrament God calls people to faith, gathers believers together into the church, and prompts the church to maintain places of worship and the office of pastor to keep them in Word and Sacrament. God is present in the pulpit, the baptismal font, and the altar where His sacrament is celebrated. He speaks in the sermon, the liturgy, and the hymns. Where these things are, God is present, and is calling the church into being.

HE: These pastors don't spring up out of the ground. They come from within the church. The liturgy and hymns, likewise. Even the Bible and the Confessions were written by people of the church, for the church.

ME: By the same reasoning you could also say that seminaries are built by the church, and the chapels in which their faculty, staff, and students worship are an artifact of the church.

HE: You're just bandying words. There is no church here. No one worships in this building on Sunday morning. No one belongs to a congregation that regularly worships here.

ME: What about the people who attend chapel services here?

HE: I mean belong as actual members. Those people are all members of other congregations, and they worship somewhere else on Sunday.

ME: So the day of the week where all this happens must be pretty important. And official membership, which naturally has to be granted by the voters' assembly...

HE (ignoring me): No one is called to be the head pastor here, responsible for all the preaching and teaching and liturgy that go on here. Even the sacraments that they celebrated here have to be sponsored by a local congregation.

ME: Because it isn't the Word of God, but the decree of a voter's assembly, that ratifies the Sacraments.

HE: Tsk! I know it doesn't have to be a voter's assembly, but there has to be some entity, some organization, something with a Constitution or a charter...

ME: Really? So are you saying it isn't the Word of God that causes the sacraments, but the constitution or charter of a corporate entity?

ME: Doesn't the Seminary have a charter?

HE: The Seminary is not a church. It's an educational institution that belongs to the Synod.

ME: OK. So doesn't the Synod have a constitution?

HE: Yes, but the Synod isn't a church. It's a voluntary association of congregations, which are the church.

ME: OK, but didn't you say that the church has the authority to ratify the Word-and-Sacrament ministry? There you are. If they ratify the chapel as a house of worship...

HE: Ha, ha. The Synod isn't a house of God. The individual congregations are.

ME: The house of God is where He is present. Jesus promised to be present wherever any number of people are gathered in His name. That sounds awfully like the idea that wherever the Word and Sacrament are, is the tabernacle of Christ's presence. I don't remember Jesus adding a clause about this only applying to Sunday morning.

HE: But the Bible also says to do all things decently and in order.

HE: No one has a right to go set themselves up as a pastor without being called by the church.

HE: So also, no one has a right to go set themselves up as a church, without...

ME: Without what? Without a majority vote? Who gives them a right to put it to a vote? How do they ascertain that it is God's will? Where is the line between "doing everything decently and in order" and "everybody doing what seems right in his own eyes"?

ME: How did Christians get along before there was such a thing as the sovereign voters' assembly, anyway?

HE: Now look here. The apostles elected Matthias, then they chose the seven deacons...

ME: They cast lots. That's not the same thing as taking a majority vote. It was like putting a bunch of names in a hat and pulling out one, or seven. In effect, God had the only vote.

HE: Still, they selected the names that went into the hat.

ME: Who did? The nominations committee? The council of apostles? Or the general assembly of believers, taking nominations from the floor?

ME: Does Robert's Rules of Order validate the existence of the church?

HE: You're a real treat to talk to.

ME: I know. You should have heard me when I was arguing your side of this, half a lifetime ago.
Posted by RobbieFish at 12:08 AM

So, your ideas may have changed, but not the fact that you are right?

Assuming I'm right now (which I do), that must mean I was wrong then.