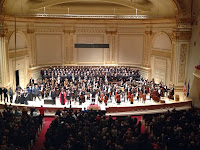 Friday, November 22, marked the 100th anniversary of composer Benjamin Britten's birth. That evening I had the great privilege to be part of a performance of Britten's operatic masterpiece Peter Grimes at Carnegie Hall. I sang as a member of the St. Louis Symphony Chorus, joining the St. Louis Symphony Orchestra, a fantastic principal cast, and conductor David Robertson in a performance that got rave reviews and a rowdy ovation.

This being my second time on stage at Carnegie (after joining the SLSO, the chorus, and Robertson in John Adams' On the Transmigration of Souls and Brahms's German Requiem in April 2006), it would be less than accurate to say this was a once-in-a-lifetime experience. But the thrill of being on the spot when such an amazing account of that opera is given, of being at the center of the cultural universe to honor its composer on his 100th birthday, is well nigh unrepeatable.

Some time when I'm not rushed to get ready for work, etc., I may add to this post. I would like to share some of my impressions of the music, of the cast, and of the differences I noticed between performing it at St. Louis's Powell Symphony Hall (the previous weekend) and at Carnegie. For now, I just wanted to mark this milestone in my blog. Being in New York for only my second brief trip was, of course, fun and exciting. Getting to know my friends in the Symphony Chorus in a more intimate way was delightful. Making great music in a great space, with great artists all around me, and being even a small part of an event that was so well received, makes it a memory to cherish. I promise not to boast about it... much... after this. But for just one minute, let me soak in it!
Posted by RobbieFish at 11:59 AM