More series of books I am trying to keep up with, brought to you by (authors whose last names begin with) the letter S.... 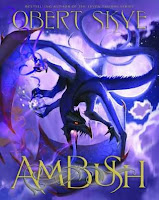