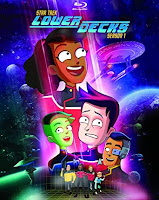 The DVD box set for Season 1 of Star Trek: Lower Decks finally came out, and I watched it all in one day. It wasn't as much of a binge as you might expect. Only two DVDs, with five episodes each, plus a few special features; and each episode only 22 minutes long. I was ahead on my 40 so I took a couple hours off in the afternoon, then watched the rest after a work-related meeting in the evening. It was tiny as Trek series go, but I got a big kick out of it. And that's saying something. I mean, I actually owned Star Trek: The Animated Series on DVD at one point, and hated it so much that I got rid of it after watching only a couple episodes. I know, I'm going to regret that if I ever feel driven to complete my cycle of Star Trek reviews. But honestly, I was already working on it when that happened. Animated Star Trek can suck and, prior to this, has sucked. But the pattern is broken, so maybe there's hope for the still-to-come series Star Trek: Prodigy.

STLD is was created by a nerd named Mike McMahan, and boy! would it be fun to be him. In the Trek timeline, it's set approximately just after the events of Star Trek: Nemesis (the Next Generation film in which Will Riker and Deanna Troi got married). The main characters are junior ensigns on board the starship Cerritos – as unglorious as a Starfleet career can be. They do the scut work that keeps their ship going, like scraping crud off of filters, fixing food replicators when they go on the fritz, and installing space-age gizmos on second-contact planets. Their ship is no Enterprise, either. Old, out-of-style, showing a lot of wear and tear, and crewed by misfits from the top of the command chain down, it specializes in "second contact" – not first, mind you – with new life and new civilizations. What they mostly learn is that the neat solutions to the first-contact stories of the elite Trek crews often lead to new and perhaps worse problems later.

The show is a menagerie (heh) of alien races from most of the Trek series so far – including ones only previously seen on the animated series, or briefly glimpsed in the background of the other shows. It revisits a planet last seen in The Original Series, and even brings the acronym "TOS" into canon (albeit standing for different words). It brings back a one-off race of TNG villains and makes them a bigger threat than the first time. It hints at not all Ferengi living up to the hand-rubbing, furtive stereotype. It takes advantage of being drawn by animators to explore environments that would be too far-out or expensive to depict in a live-action episode. It does Trek, legit Trek, but with the character-design sensibilities of a prime-time animated sit-com like The Family Guy, The Simpsons or Rick and Morty, and the laughs to go with it.

Here are the main characters for you. From the left, there's D'Vana Tendi (played by comedian Noël Wells), a perky, relentlessly optimistic Orion girl who, as the newest addition to the crew, serves somewhat as a point-of-view character, taking in every new experience with wide-eyed wonder. Then there's Sam Rutherford (comedian Eugene Cordero), an engineer who is still getting used to being cybernetically enhanced (read: he doesn't fully understand how his implants work yet). Next is Brad Boimler, an ambitious, rules-bound, insecure klutz whose best friend describes him as a weasel with a tiny human inside. Playing him is Jack Quaid, late of TV's The Boys and (no kidding) the son of Dennis Quaid and Meg Ryan. (And you thought having Gregory Peck's grandson playing Spock was a big deal. Well, it is.) Finally, we have Beckett Mariner, a rebellious, reckless, super-talented type of young female Kirk, who rose rapidly through the ranks on sheer talent and was busted down to ensign again (and again) on sheer bloodymindedness. She lacks respect for authority and therefore seems reluctant to earn any. Played by Tawny Newsome of Space Force, she is also secretly (until the secret gets out) the daughter of the Cerritos's captain. 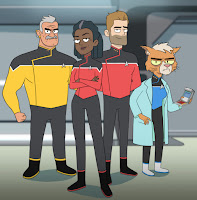 While we're on that subject, here are the senior officers of the ship, who are (not surprisingly, if you recall the title of the show) secondary characters. The security chief, at left, is an insanely aggro Bajoran named Shaxs (pronounced "Shacks"), played by the great voice actor Fred Tatasciore (pronounced "ta-ta-shore"), whose notable roles include AAARRRGGHH!!! in the Trollhunters franchise, the Hulk, Megatron, Yosemite Sam, Dracula, Bane, Commissioner Gordon, Hades, Zeus, Deathstroke ... all right, I almost hyperventilated there. Next to him is Captain Carol Freeman, played by Dawnn Lewis of A Different World and Hangin' with Mr. Cooper: uptight, a stickler for authority, frayed to the end of her last nerve by her daughter's undermining behavior. Then there's First Officer Jack Ransom, played by Jerry O'Connell of Sliders, My Secret Identity and, of course, Stand By Me. His character is a gung-ho, Riker-on-steroids type (I'm not kidding about the 'roids; wait till he rips his shirt off) and it's hinted that there might be an attraction between him and Mariner. And finally, there's the cat, I mean Caitian, chief medical officer, Dr. T'Ana – be careful how you pronounce that apostrophe – played by Gillian Vigman of MADtv and Sons & Daughters. A little battle-scarred, with a smoky voice that hints at an excess of nighttime screeching, she's the hilarious opposite of the last Caitian character depicted in Trek's 1970s animated series.

So, there are 10 episodes. And all though I'm soooo over listing every single episode (as I did in my first umpteen Star Trek revies), I'll say in fairness that an episode-by-episode breakdown of Picard and Discovery is pointless because they've been so heavily serialized that you don't even notice where one episode ends and another begins. However, I think with only 10 episodes, and very episodic ones at that, I can reasonably distinguish that Second Contact is the one where most of the crew turns into zombies; Envoys involves a disastrous errand to ferry a Klingon negotiator to an embassy on what a writer described in the DVD extras as the Epcot Center of alien planets; Temporal Edict is the one where Capt. Freeman cracks down on the crew's time management ethic of "buffer time" (the old Montgomery Scott chestnut about saying a task will take much longer than it really will, so you'll seem a miracle worker when you get it done faster), and this almost destroys the ship; Moist Vessel involves a ship full of terraforming fluid and a crewman whose ascension to a being of pure energy Tendi inadvertently screws up; Cupid's Errant Arrow is the one where Mariner is suspicious of Boimler's all-too-beautiful girlfriend; Terminal Provocations features an ensign who makes both Boimler and Mariner look like the ideal Starfleet officer, and introduces Badgey, a psychotic tutorial hologram obviously inspired by Microsoft's "Clippy"; Much Ado About Boimler finds this series' master-of-suffering-from-weird-problems turned into a blue, transparent wraith by a transporter mishap; Veritas has the main characters interrogated about their officers' recent activities by what appears to be an alien drumhead trial, but is really more of an object lesson about cultural misunderstandings; Crisis Point is where Mariner works out her mommy issues by casting herself as the villainous Vindicta in a holodeck movie parody of the TOS feature films; and No Small Parts brings the season to a cliff-hanging conclusion (not literally) with one regular character killed off in an act of sacrifice and another transferred to a different ship.

Guests include John de Lancie as Q, Jonathan Frakes as Riker, Marina Sirtis as Deanna, as well as J.G. Hertzler (Martok on DS9), Haley Joel Osment, Kurtwood Smith, Jack McBrayer (30 Rock), etc. etc. What else can I tell you? There's a lot of profanity in this series but it's all bleeped out ... barely. Use your imagination.

So, this is weird, but because this is a Star Trek comedy, all three of my Three Scenes That Made It For Me are going to be jokes that really landed. I mean, I laughed hard. (1) Ransom tells Freeman that her plan to drive Mariner into quitting by assigning her the worst jobs has backfired, because she keeps finding ways to make it fun. Freeman snaps at him, "I have her emptying BLEEP out of the holodeck's BLEEP filter!" Ransom, shocked, says, "They actually use it for that?" You laugh, knowing BLEEP well they do. (2) Mariner asks Boimler if he's just excited about having a new ass to kiss, and he says, "I wouldn't put it that way ... but yes." (3) Really, every horrible thing that happens to Boimler – there's about one per episode – but I think the one that takes the cake is when a giant, spider-cow slurps him into her mouth and gums him senseless. I still laugh every time I picture it in my mind. Does that make me a bad person? Oh, well.

Honorable mentions: The trippy thing that happens when that one crewman ascends, the gag about the most important person in the history of Starfleet, and the movingly Shaxs thing that Shaxs does when his character arc arrives at its inevitable conclusion.

Bottom line, I love these characters. I love them from page one. They're well designed, well written, super-well acted – I mean, these folks have scene-stealing comedic talent, and that's with their voices alone. The imagery is great. The storylines are a gas. The visual and audible Easter eggs are a treasure trove for Trekkies. It's truly Trek, not just a parody of Trek; but it's so, so funny. And it manages all these things in 10 episodes of 22 minutes each, not a wasted moment among them. Knowing CBS had this up its sleeve makes me wonder how they've botched Discovery so badly. (In fairness, I've only seen the first two seasons of that show; but in unfairness, the only parts I totally loved are spinning off to become a separate series, Strange New Worlds.) Just think, this show was in development before Discovery went on the air. It takes a year to make each episode. It's a process that must be fraught with tremendous care, and it's paid off so far. The hard part is waiting for another year for my next 3 hour, 40 minute fix of Lower Decks.
Posted by RobbieFish at 6:14 PM