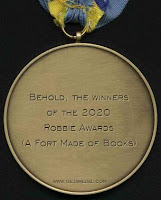 The 2020 Robbie Awards are either the fifth annual or the 12th, depending on whether you include retroactive awards for the years since I started posting all my reviews on this blog. (Previous reviews, originally published on MuggleNet dot com, were posted in a great big data dump when I feared they were going to be deleted.) So, regardless of the number, let's start by counting the books I finished reading during the Year of Our Lord 2020: I guess 80 is a nice number. It beats last year's total of 69, anyway. It would be nice to break 100 again, but what can I say? Some of the things that took my time away from books this year included work, church activities, spending time with my parents (most weekends, actually, since they live within an hour's drive), playing the piano, binge-watching seasons of TV on DVD, and yeah, blogging about other stuff. I have so many interests, you know? Also, I read portions of, but haven't yet finished, quite a pile of books this year, most of which I plan to finish. Unfortunately, I have this magpielike tendency to go wide-eyed at each new book that falls into my mitts, and to drop whatever I'm reading at the time to plunge in.

Nevertheless, I still managed to inhale 80 books, many of them of the type I used to write about on MuggleNet, under the Book Trolley rubric of "If you like J.K. Rowling, you may also like..." Several of this year's books became instant favorites in my household of one. So, choosing which ones to anoint as the best is tough. Nevertheless, here goes. I'll keep it brief this time. For more info, see my separate book reviews.

Critic's Choice
I'm the critic. In my critical opinion, the novel that checked all the boxes as the most satisfying feat of literary creation on the list above was His Majesty's Dragon by Naomi Novik. Her writing is beautiful and stylish, her insertion of a dragon-powered aerial corps into 19th century military history is seamless, and I was emotionally touched by the bond between the two central characters, a man and a dragon. Honorable mentions: Some Kind of Happiness by Claire Legrand, The Boneshaker by Kate Milford, Icefall by Matthew J. Kirby, Dark Hollow by John Connolly, and most of the other books by Naomi Novik that I read this year.

Reader's Choice
I'm the reader. On the order of pure entertainment, and without repeating any titles I've already named, I got the most memorable charge out of Insignia by S.J. Kincaid. Hilarious, action-packed and disturbing all at once, it conjures an original fantasy world that doesn't seem all that improbable, as a possible future for our world, and its characters are fun to follow. Honorable mentions: Kincaid's Vortex, the sequel to Insignia; Castle Hangnail by Ursula Vernon and A Wizard's Guide to Defensive Baking by T. Kingfisher, who are actually the same author; Circus Mirandus and The Bootlace Magician by Cassie Beasley; and Thick as Thieves by Megan Whalen Turner.

Kid's Choice
I'm younger on the inside than on the outside. For appealing to the kid in me (again, without repeats), this award goes to The Secret Life of Ms. Finkleman by Ben H. Winters. It's a delightful romp through middle school mystery, classroom politics and rock 'n' roll, and I really felt a connection with the characters – particularly the classical piano progidy who "really needed to rock." Honorable mentions: The One and Only Ivan by Katherine Applegate, The Hotel Between by Sean Easley, The Return of Meteor Boy? and The Great Powers Outage by William Boniface, The Book of Secrets by Cynthia Voigt and The Train to Impossible Places by P.G. Bell.

Best Short Subject
I only read a couple of short story collections this year, so almost by default, this award goes to Sideways Stories from Wayside School by Louis Sachar. However, I really did get a kick out of the quirky antics of the class at the top of the school. Honorable mentions: Sachar's follow-up collection, Wayside School Gets a Little Stranger, and The Worst Witch by Jill Murphy.

Best Documentary
Again, it's pretty much by default, but I'll award the title for non-fiction entertainment to Humorists by Paul Johnson. I particularly remember his essay about Laurel & Hardy, which made me seriously want to collect their films on video and study how they created laughter.

Best Graphic Novel
This award honors excellence in heavily illustrated books. By a narrow majority of votes, I'm giving it to El Deafo by Cece Bell for capturing a deaf child's struggle to fit in with her age group with charm, wit and a touch of fantasy (bunny ears on everybody!). Honorable mention: New Kid by Jerry Craft, The Wizards of Once by Cressida Cowell and its sequel, Twice Magic.

Best Art
Several books I read this year, including ones I've mentioned in the above categories, were greatly enhanced by their illustrations between their covers. I'd like to give this award to Ursula Vernon's Castle Hangnail. Her pictures of a plump, 12-year-old witch and her castle minions were sweet and weird and made me laugh. Honorable mentions: William Boniface's Ordinary Boy books, Louis Sachar's Wayside School stories, Tui T. Sutherland's Wings of Fire books, The Shadow Cipher by Laura Ruby, Escape to the Above by Adam Jay Epstein, and The Book of Secrets by Cynthia Voigt.

Best Song
I combed through several hymnals this year, but blogged them on a different thread and didn't consider what I was doing to be book reviews, so much as criticism of hymns (tacky and otherwise). I also purchased some piano albums and blogged about one of them (so far) under the "piano" label. However, I did review a newly released collection of hymns, which I labeled under "books." Not just because it was the only work of its type that I included in the list above, but because it was really a fine document of original hymn writing, I'm thrilled to present the first-ever Robbie Award in this category to Rejoice, O Zion! Sing! by Alan Kornacki, Jr.

Best Audiobook, Best Newcomer, Best Comeback
No award in these categories this year. Sorry! This whole year seems to have fallen into a crack between audiobooks, prepublication proofs and rediscovered classics, unless you count some deep dives into long-running franchises. Which I don't. But I'll think about adding books in these categories to my reading list for next year. Cheerio!
Posted by RobbieFish at 10:22 AM