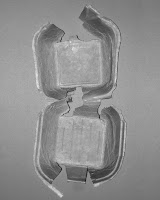 I'm not a big fan of keeping leftovers. I'm more of a "heat up what I need right now" kind of guy, and when it comes to those last couple slices of baked-from-frozen pizza, I'm a bit of a "throw away whatever is left when I'm full" guy, too. (Not a fan of leftover pizza.) Considering how little I do in the kitchen these days that's really creative or, apart from heating up frozen stuff, counts as cooking in the strictest sense, it's actually surprising how much use I've made of leftovers during the last week, thanks perhaps to being cooped up in my apartment all alone by COVID-19.

I should note that when I do really cook something – anything that may involve browning meat, boiling water, chopping vegetables and/or pressing ingredients into a baking dish – I do put up leftovers to eat during the next day or two. And this week, I've economized cooking time and ingredients to the extent of using some of the same leftovers two different ways, and combined the "heat up something frozen" approach with actual cookery.

To trace the chain of leftover use, let's start with the jar of spaghetti sauce that I opened one night when I was heating up a couple of frozen, breaded chicken patties. I spread the sauce on a couple pieces of toast, topped them with the oven-hot chicken patties and then added a slice of swiss cheese (sorry, I was out of mozzarella) to each open-face chicken parm sandwich. I zapped them in the microwave for 15 seconds just to put a little melt on the cheese, and I was very happy with the result. I have to admit, those frozen chicken patties tend to taste a bit nasty unless you dress them up. This bit of microwave-aided improv covered that up well.

So, the remaining seven-eighths of the jar of marinara went into the fridge. It was joined the next night by half of a jar of Indian curry simmering sauce that I had picked up on clearance some time ago, and about which I was starting to worry as to how long I should keep it. What did I use the first half of the jar on? Well, let's see. I opened a can of chunk chicken and a bag of frozen "seasoning blend" (diced, frozen onions, green and red peppers, celery and parsley) and browned up half of each in a small frying pan. Then I added the half-jar of simmering sauce, covered the pan with a saucepan lid, and left it simmering on low heat while at the same time preparing a package of Mahatma-brand saffron rice – to which, I'm sure, the word "saffron" applies about the same way as the word "smurfberry" in Smurfberry Crunch cereal. When the rice was done, I stirred in the curry/chicken/vegetable mixture and, by golly, ate it. I may, in fact, have divided it into two servings and saved one for the next day's lunch.

So by now, I had most of a jar of marinara, half a jar of curry sauce and half a can of chunk chicken (covered with cling wrap) in the fridge, and half a bag of seasoning blend (mirepoix?) sealed in a ziplock bag in the freezer, leftover-wise. The next day, I went grocery shopping and decided to get a package of Barilla-brand ready-to-bake lasagna noodles and the ingredients I would need to follow the recipe on the back of the box. These included a pound of ground beef, a 15-ounce tub of ricotta cheese and a 4-cup resealable bag of shredded mozzarella.

Back at home, I sauted the remaining seasoning blend in a larger frying pan, then crumbled in the whole pound of hamburger. But now I realized that I would have to halve the recipe, because I don't have a 9x13-inch baking dish; the nearest size that I do have is a scaled-down oblong, maybe 7x11. So, in a separate bowl, I blended half the tub of ricotta with a small amount of mozzarella and a bit of the grated parmesan that I already had on hand. I pulled out the mostly full jar of marinara that was already open in the fridge, nonstick-sprayed the pan, and layered in the sauce, noodles, ricotta mixture, mozzarella, and meat mixture as directed by the recipe on the box – only, instead of each layer having three full sheets of stiff lasagna, they only had two with the ends broken off and the extra fragments arranged along one end of the pan.

I also had to adjust the cooking time, but the dish turned out great. However, I had enough for three meals on my hands, so two-thirds of it went back into the fridge and got eaten the next day at lunch and dinner. Meanwhile, I still had about a third of the meat mixture left over (which went into the fridge in a spare glass jar). I also put back half of the ricotta and a little less than half of the mozzarella, which I still haven't found a use for, and perhaps half of the lasagna noodles. Maybe I'll just have to get some more meat and do another tray of lasagna; I already have another jar of pasta sauce.

Yesterday, I worked out how to use up some of the leftovers still abiding in my fridge. For breakfast, I had an omelette that used up about half of the leftover mixture of browned meat and seasoning blend, plus some cheese (not the mozz, though). For dinner, I heated up a plastic pouch of jasmine rice (90 seconds in the microwave), a steamer bag of frozen peas (5 minutes in the microwave), and meanwhile combined the leftover meat mixture, chunk chicken and curry sauce in the small frying pan and simmered them under a saucepan lid. When the peas came out of the microwave, I combined all the other ingredients in two bowls and, to save myself from more leftovers, ate both bowlfuls then and there.

Imagine if I'd had to put away one of those bowls for later: half of the components had already been saved as leftovers once, and the mirepoix had gone round twice (once while still frozen and once after being cooked).
Posted by RobbieFish at 10:25 AM