I knew I was going to have a DVD watching binge when travel restrictions meant I wasn't going to get out much last weekend. So, during a quick tour of Walmart, I picked up a cheapo DVD of all three "Sandlot" movies – The Sandlot, The Sandlot 2 and The Sandlot: Heading Home. I'd managed to reach this date without having seen any of them, in spite of having received numerous reps of "You're killing me, Smalls!" from a publisher under whom I worked as a newspaper editor for a couple of years. (In my defense, the "rookie mistakes" I was making were part of the adjustment from the house style of the previous publisher, who sold the paper to him.) But that record no longer stands.

In the original movie (way back in 1993), these guys played a gang of baseball-crazy kids in a Los Angeles valley community who spent the summer of 1962 bonding over baseball and getting into various other kinds of mischief. The kid in the blue cap was the only real baseball whiz, and most everybody else was just there to help him practice his skills so he could someday make the big leagues. The guy in the front row touching his face (ew! how unsanitary! report him to the COVID-19 cops!) is the aforementioned Smalls, the movie's point-of-view character, who doesn't know anything about baseball and has no skills whatsoever when Blue Cap invites him to the sandlot, over the initial objections of everybody else.

Smalls picks up some skills right quick, smashing his first home run over the fence into a yard guarded by the meanest dog on the West Coast. Unfortunately, it's a very valuable ball that he borrowed from his stepdad without permission. So, breaking the mold of most baseball movies, this isn't one that builds up to the big game and the final inning, where victory or defeat comes down to the last at-bat. Instead, it ends up mostly being a nostalgia flick about the zany antics of a bunch of kids with nicknames as quirky as themselves. They camp out and tell scary stories. They go to the pool and ogle (in the case of a kid called Squints, more than ogle) the pretty lifeguard. They make the regrettable decision to try plugs of chewing tobacco before going on a carnival ride. They make a series of cartoonishly silly attempts to retrieve the precious baseball from a dog named Hercules, and they finally let loose a madcap chase through town. Though not exactly a great piece of cinematic art, it's sweet, funny and upbeat, and features James Earl Jones (the voice of Darth Vader) as a not-as-mean-as-everybody-thought old man, Karen Allen (Starman, the Indiana Jones movies) as Smalls' mom, Denis Leary (Ice Age, Rescue Me) as the stepdad, Chauncey Leopardi (who was in half the episodes of Freaks and Geeks and the third movie in this series) as Squints, Tom Guiry (Mystic River, The Black Donnellys) as Smalls, and as a dream-sequence appearance of the Babe, an actor named Art LaFleur whom IMDB credits with 168 actor credits, yet it considers this his best-known role. Huh.

Besides the freckly fat kid saying, at least twice, "You're killing me, Smalls" – the line that can make you feel like you know this movie without actually seeing it, sort of like "If it ain't Scottish, it's crap" for So I Married an Axe Murderer – it was a decent piece of entertainment. It made me squirm (I was totally that Smalls kid, when it came to athletics). It made me laugh out loud. Here are the Three Scenes That Made This Movie For Me: (1) After three vacuum cleaners simultaneously blow up in their tree house (please don't ask), the one kid who didn't get out in time limps up, coated in dust, and says, "We've been going about this all wrong." (2) It's a cumulative thing, but the way Benny (the blue cap boy) bestows his friendship on Smalls without expecting anything in return – and his friendship proves to be such a valuable thing – is really kind of moving. (3) Yes, of course, the scene that gets the kids banned from the swimming pool, which would go down in the books as sexual harassment today (at least) but that played as boyish high spirits in 1962-cum-1993, bolstered by the epilogue revealing that Squints and the cute lifeguard got married and had nine kids. Nine kids! 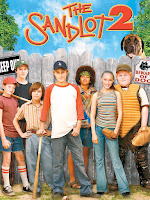 Made 12 years later and set in 1972 is the straight-to-video sequel, The Sandlot 2. Both are written, directed and narrated by David Mickey Evans, whose other writing and/or directing credits include the feature films Radio Flyer, Smitty, The Final Season, the regrettable chimpanzee-baseball comedy Ed, and some TV movies and straight-to-video films (notably two sequels to Beethoven and a certain Ace Ventura: Pet Detective Jr.). I think The Sandlot (original movie) may be the pinnacle of his career. This movie comes across to me as a shameless attempt to cash in on it. Other than taking out most of the baseball action and replacing it with a women's lib subplot, a chaste teen romance and a little amateur rocketry, and transposing it one decade later, it is almost a shot-for-shot remake of the original movie – including the James Earl Jones cameo at the end, teaching the kids the same lesson their predecessors learned in 1962. Even the quest to retrieve the priceless baseball from the vicious dog is recapitulated, only with a different dog (a descendant of Hercules) and a working scale model of the space shuttle instead of a ball. Other than the fact that hero boy David's backstory means he must face his worst fear (the dog, appropriately, is named Goliath), it adds essentially diddly-squat to the franchise.

OK, it does have a few things going for it. Teryl Rothery of Stargate SG-1 and The Good Doctor plays the hero girl's mom, and her NASA engineer dad is the really quite funny Greg Germann (whose character name on Ally McBeal was Richard Fish, so I have to support him). Also, the hero boy is played by the stupidly good-looking Max Lloyd-Jones, who could have passed as a 13-year-old reverse age double for Brad Pitt. And I can actually award it Three Scenes That Made It For Me, which is more than I can say for some movies that I truly hated. To wit: (1) The obligatory fat kid says, in one speech, the two funniest lines in the film: "I crapped my pants" and "We've done everything we can – badly." Truly, though, we didn't need to see the back of his pants when he turned to leave. Imagination good. (2) The epilogue reveals that a certain character was abducted by aliens and never seen again. That's what you miss when you eject the disc early. (3) The mean dog saves David when he gets buried alive, a nice variant on the first movie's twist in which Smalls saves the mean dog. I must say, though, that the sandlot team's rivalry with a bunch of snotty little leaguers is a wasted opportunity to be more of a sports movie; that plot line ends early and with very little drama.

The Sandlot: Heading Home, made in 2007, benefited from having different writers and director. Set in 1976, it approaches the sandlot from an entirely different angle, bringing back Benny (now played by the better known Danny Nucci, who was in Titanic, Crimson Tide, Alive and The Rock) and Squints (still played by the same guy, but now grown up) together with a new bunch of kids who now have to win the championship little league game in order to save the sandlot from being turned into condos. As an added plot twist, an arrogant, self-centered baseball star (played by the late Luke Perry) takes a baseball to the head and gets sent back in time for a second chance to do things right. Instead of being a complete ass, walking all over everybody and seeking his own fame and glory, he could stick by his friends for the love of baseball and all that. So, it ends up being kind of a time-travel-and-personal-redemption story, only with baseball. Plenty of baseball.

The hero kid, in this film, is played by a certain Keanu Pires who seemed to have the sarcastic snot with a heart of gold role down to a T; I really thought he had the charisma to go somewhere, but alas, besides this movie he had only two minor acting roles and (ironically, his most successful movie) a stunt performer gig in the "dog from outer space" movie, Good Boy. The child actor you probably would recognize, if you saw this film, is Alexander Ludwig, who lately played one of the three characters I cared about in Bad Boys For Life – the most recent film that had no scenes that made it for me – because unlike most everyone else in the picture, he had an aversion to violence. In this movie, he plays the snotty star of the evil little league team, whose coach/father (in that order) wants to redevelop the sandlot. When you see him, you have two thoughts in such rapid succession that you might mistake them for simultaneous. The first is, "I'd like to smack that little rat-fink across the chops." The second is, "Why is he familiar?" He was also in The Seeker: The Dark Is Rising, The Hunger Games, Race to Witch Mountain (the one with the Rock) and has been playing the lead on TV's Vikings. You almost wouldn't recognize him today. Gee whiz, has that guy grown into his full potential as a human animal.

So, enough of that. Three Scenes That Made It For Me: (1) The little boy who hasn't talked since his father died, suddenly pipes up when it's time to set the (anti-)hero boy straight. Someone interrupts him to marvel that he can speak, and the kid snaps, "Shut up, it's my turn to talk!" Actually, that kid is the soul of the movie – or rather, he has it in his eyes. (2) Officer Pork Chop (played with comic zest by Chris Gauthier) aids and abets the kids when they want to break into the movie theater to talk with Young Tommy (the kid whose older version is played by Luke Perry). Sneaking past the concession stand guy proves hilariously difficult. (3) The obligatory fat kid's line (more or less): "Tommy, I'm going to ask you a question and I need you to be honest with me. Will you spot me a quarter for a pack of Jujubes?" The DVD's blooper reel attests to how difficult it was to deliver that line without somebody cracking up.
Posted by RobbieFish at 6:58 PM