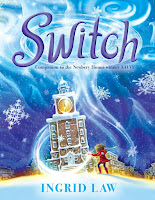 In the little, and even littler known, state of Kansaska-Nebransas – custom made for them by a grandfather who had the power to stretch the land and create new places on the map – live the Beaumonts. They're a branch of a family whose members each have a unique ability known as a "savvy" that emerges, usually, on their 13th birthday. Many of them are big, earth-shaking talents that require some finesse to "scumble," or bring under control – like one Beaumont sibling who can whistle up a hurricane, or another who can call down lightning.

These days, only the younger three of six Beaumont siblings are still living at home: Samson, who can turn invisible and, as a bonus, can boost another person's strength with a touch; Gypsy, who just came into her power, allowing her to glimpse scenes from other people's future or past; and Tucker, age 7, who feels a little left out because his savvy hasn't arrived yet. They have the perfect mom and a dad who never gives up.

Life is pretty good, except Gypsy has been feeling lonely since her former best friend moved on to a more popular set. Then two things happen in quick succession that upset the comfortable status quo. First, the Beaumont kids learn that they have to make room in their home for their mean Grandma, from their non-savvied father's side of the family, because she is growing forgetful. Then, for reasons never explained, their savvies switch.

All at once, Samson becomes Fire Guy, a human furnace who can shoot flames out of his fingertips; Gypsy discovers a talent for stopping and (after a long, frozen moment) re-starting time; their mom becomes disaster-prone; and even little Tucker, who shouldn't have a savvy at all, gets the power to grow to giant size and shrink back down. At first, their unexpected new powers create mayhem. But during a family trip to the Denver area to fetch Grandma Pat, each of their new powers proves vital to saving the confused old lady from a fate predicted by Gypsy's last pre-switch vision of the future.

During an evening in the city without adult supervision, the sublings – joined by two kids they just met – search for their runaway Grandma and try to prevent her from meeting a terrible fate. Grandma Pat thinks she's 16 again, running away from her tyrannical dad to go to a high school dance. But the actual high school is kind of a deathtrap, and the city streets in the midst of a blizzard aren't much safer. A couple of teenage bullies, an orange striped kitten and a the patrons of a Hawaiian BBQ waffle buffet with 24/7 karakoke get mixed into the adventure, while Gypsy struggles with a sense that her abilities – both before and after the switch – never seem to make a difference to what's going to happen.

It's a delightful, funny, warm-hearted story full of quirky magic and kitten-loving-kid cuteness. It handles themes of understanding what aging loved ones are going through, dealing with bullies, accepting who you are (even while undergoing changes) and keeping cool under pressure. It also depicts some armed forces personnel in a positive light. While it ties up a trilogy pretty tightly, I'm hoping to see more from author Ingrid Law. This is her third book, a companion to her previous books Savvy and Scumble.
Posted by RobbieFish at 8:55 AM