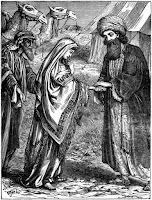 Here is another item I can cross off the list of hymns I have been planning to write for Edifying Hymns, the projected sequel to Useful Hymns. It's kind of a scary prayer to write, since I'm one of the single adults whose numbers seem to be increasing in the Lutheran church. I've been single so long that I don't know what I would do if God answered it, in my case, with "OK, here you go." Like the best prayers, it uses God's own words to twist His mighty arm. Scriptures specifically cited in this prayer include Genesis 1:18ff; Genesis 24:63-65; Proverbs 18:22; John 2:1ff; 1 Corinthians 7:1-9; Ephesians 5:22ff; and more or less the whole book of Ruth. The tune, which was literally the first one I looked at out of an alphabetical list of eight hymn-tunes in the same meter, is titled ACK, VAD ÄR DOCK LIVET HÄR and is from the 1697 Swenska Koralpsalmboken of Stockholm.

1. God, who deemed it was not good
Man should live in solitude,
Though in paradise he stood:
Bless Your unwed children.

2. Some have not the gift to spurn
Impure lust with scant concern;
Would You not, than they should burn,
Rather have them marry?

3. Isaac, fifty, did not fail
His forlornness to curtail;
Seeing him, her bridal veil
Donned Rebekah gladly.

4. Solomon, too, understood
That to find a wife was good;
Ruth rejoiced that Boaz would
Claim from her that favor.

5. Christ Himself, at Cana’s feast,
Bride and groom’s delight increased;
May we, too, though last and least,
Taste such joy and blessing.

6. Be the unwed woman’s guide,
Fitting her to be a bride;
Place a husband at her side,
Pious, kind, and faithful.

7. Let him learn, who needs a mate,
Chastely for but one to wait;
Make their shared devotion great,
And their marriage fruitful.

8. Let her happiness and gain
Claim his willing toil and pain,
That Christ’s love may tune the strain
Of the praise he sings her.

9. Shape, as well, her wifely ways,
That each service she essays
Such a faith in him displays
As the church owes Jesus.

10. More and more, your graces lend,
Till as one their hearts shall blend,
Letting none their union end
But Your heav’nward summons.
Posted by RobbieFish at 3:18 PM