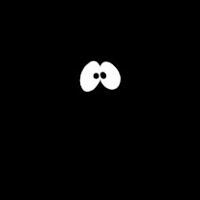 Approximately 2:37 this morning, the power went out where I live. I must have been awake, lying in bed, because I noticed. The fan blowing toward my bed stopped blowing. The light from my bedside digital clock went out. Something in the next room went "beep." Ambient light from outside, like from a street lamp at the nearby corner, faded to black.

After about 30 seconds of eerie stillness and pitch blackness, the lights came back on - including my digital clock, now reading approximately 2:38 a.m. My first thought was, "Well, the battery backup works."

A moment later, the power went out again. This time, it seemed to go gradually, dimming the light of my alarm clock a bit before going altogether. This time, the outage lasted about a minute; then everything came back on again.

I was just starting to hope that was the end of the story when, about 2:39 a.m. by my clock, the lights went down and stayed down.

After lying in darkness a few minutes, listening to a rainstorm blow overhead, I saw the first flickerings of lightning in a storm that answered my unspoken question, "What is causing this outage?"

I decided I should do something, like my civic duty of calling the power company and reporting the outage.

In the dark, I could not find my latest electric bill. So, I groped for my cell phone and dialed directory assistance, asked for the power company, and got their voicemail system.

This is when I learned a grave lesson about my particular model of AT&T Go! phone - an LG clamshell model that I bought only a year or two ago when my previous Motorola model went on the fritz. I've noticed that I can't get my own voicemail to recognize any of my number button-pushes when I am, for example, trying to erase a message. Now I discovered that, after the first minute or so of a call, my phone won't let me respond to a voicemail prompt, such as, "To report a power outage, press 2." I can press 2 until my fingers bleed, but the recorded voice on the power company's voicemail system will just keep reading its list of options, then say, "Sorry, I didn't hear your response. Would you like to hear these options again?" After reading all the options two or three times, it says something to the effect, "Since you don't have anything to say to me, goodbye," and hangs up.

Somewhere between "Press 2 for a residential account" and "Press 2 to report a power outage," my phone flew up its own headphone jack.

Trying again - going through directory assistance again, because my phone didn't save the number for the power company - I hoped I could get through the prompts before the phone's willingness to do the voicemail-keypad-options dance expired, but I couldn't. Also, unlike some businesses, my power company doesn't have a voicemail system that will respond to voice prompts, such as, "Two, you dumbass!"

Sitting in the darkness, listening to thunder and rain on the roof, I realized that if my life ever depends on my ability to respond to a recorded voice's instructions to press numbers on my cell phone, I am going to die.

I tried calling AT&T Customer Service, but no one was available at that time of night to help me with this technical issue - though, to their credit, their voicemail system does respond to voice commands.

I tried looking for the setting in my phone that lets the number buttons go to sleep during a call, but only succeeded in draining the battery down to two bars - which, in the language of battery charge indicators, means "minutes away from dropping to one bar, then making a long series of obnoxious sound effects, then going dead." Those three bar-indicators are so helpful. You get three bars for days (in the case of my camera battery, weeks), telling you your battery is fully charged; then it goes two, one, zero in about a handful of minutes.

All this pushback started to piss me off. I wasn't going back to bed without knowing whether my alarm was going to go off in the morning. I wasn't going to accept not being able to do anything because my LG phone is stupid, and because my power company's voicemail system was programmed in 1995. So, I groped my way into a shirt, felt around for my house keys and car key, and found my way outdoors. I had decided I was going to try the landline phones at work.

I already knew I was going to have to pull the emergency release cord on my garage door opener, so I could back my car out of the house. I hadn't reckoned on how utterly black the garage was, inside. I couldn't find the cord, and I was starting to get lost in the garage. So I groped my way back out into the rain, got back into the house, and miraculously managed to find a flashlight I had stashed in the front closet without knocking anything over (it was a close thing, though). Back out to the garage; up with the garage door, now disconnected from its lift mechanism; out with the car; down with the garage door (manually; grr); and out to the street in my car, in reverse. I only narrowly avoided falling into the ditch, because I couldn't see where the end of the driveway was.

I made it to the office. I used the flashlight to find the keyhole on the back door. I picked up the first phone inside the building, and... dead. Yes, reader, the power outage was also a phone outage. I couldn't report the outage if my life, or the lives of everyone in town, depended on it. And I could tell by the darkness in the streets between home and the office that the outage affected at least a significant part of my town.

The happy ending is, about the time I reached the end of the blue streak of profanity that issued from my mouth when the office phone proved dead, the power came back on. It was about 3:30 a.m. and, since I no longer had any news to share with the power company, and a computer was right at my elbow, I decided to share this example of my mother's favorite literary genre, "Robbie stories."

EDIT: Shortly after I finished blogging this, the power cut out again, and stayed out from approximately 4:15 to 5:50 a.m. I went to bed kicking myself for not having taken advantage of the 45-minute interval when power was restored to call the power company and yell at them about their stupid voice mail system. But that's all right. I'll probably go to the AT&T Store later today and yell at them, instead, about their lousy cell phones.
Posted by RobbieFish at 3:04 AM