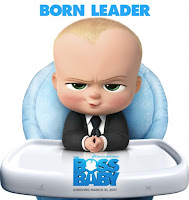 Sorry to have been so slow finishing this review (and those of two books I read around the same time), but we had a busy week at the newspaper for which I write, including a local election, and any given day during the last week I've had either no energy or no time to spare. It's been about a week since I saw the 20th Century Fox animated film The Boss Baby. But I think can still fulfill my current movie-reviewing objective of recalling the three moments that made this movie for me.

It's a cute, funny, warm-and-cuddly adventure featuring an imaginative seven-year-old boy whose jealousy of the love his parents are giving his newborn baby brother turns into suspicion when he catches the new baby chairing a meeting of local babies, planning some kind of corporate espionage against the company hero boy's parents work for - Puppy Co. Eventually, the siblings call a truce and agree to work together to halt a fiendish plot to use high-tech puppies to squeeze babies out of grown-ups' hearts, so the undercover executive baby can get back to his office at Baby Corp and little Tim can have his parents back. The upper management baby is voiced by Alec Baldwin. The boys' parents are played by Jimmy Kimmel and Lisa Kudrow. The villainous Francis Francis, CEO of Puppy Co., is played by Steve Buscemi, and Tobey Maguire narrates as grown-up Tim.

So, Moment #1: A madcap chase scene in the backyard, as Tim tries to deliver to his parents an audio cassette(?!) proving what the babies are up to, and the babies give chase. The stunts, explosions, and hairsbreadth escapes are hilariously over-the-top, but the five-second bit that makes it is when the parents look out the window and see Tim hanging onto the rear bumper of the boss baby's car-shaped walker as it rolls slowly across the lawn. This glimpse of the reality behind the kids' flights of imagination is simultaneously the weirdest and the funniest thing about an altogether weird and funny movie.

Moment #2: Tim accuses the boss baby of stealing the song his parents wrote for him - actually "Blackbird" by the Beatles - but completely misses the reference when the baby sarcastically retorts, "So, your parents are John Lennon and Paul McCartney?" Later, however, Tim sings the same song to the baby, who at the time is lapsing into pure babyishness, to coax him off a rocket that's about to blast off (long story). Kinda puts a lump in your throat.

Moment #3: There are some gags in the movie that only adults will get. Probably the one with the best payoff is the baby, who I repeat has Alec Baldwin's voice, saying, "Cookies are for closers."

It take a lot, these days, to get me to travel the distance to the nearest, or second-nearest, movie theater and to lay out the amount of money a movie ticket and a small popcorn costs. Moments like these are essential to making me feel it was worth the trip. There were other movies I could have seen, including a King Kong reboot, a live-action Beauty and the Beast. I guess the question this review raises is: What does the fact that I chose an animated movie about a suit-wearing baby voiced by Alec "coffee is for closers" Baldwin say about me?
Posted by RobbieFish at 9:44 AM