Today I made something for dinner entirely using ingredients and utensils that I had acquired for other purposes. 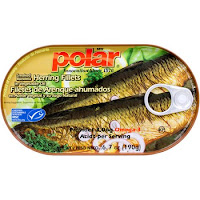 The skillet, sized to allow one to cook up a batch of Hamburger Helper, I mostly bought so I could fry eggs or make pancakes. I intended the spatula mostly for turning eggs or hamburgers. The bowl usually serves the purposes of eating breakfast cereal. Even the fork, usually employed as an eating utensil, did unusual service as a masher and puller-apart of a tinful of smoked herring fillets, like the one pictured here.

As for the ingredients, there were, of course, the kippers, which I meant to serve on crackers as a late-night snack. There was also a tin of tuna, purchased either to make tuna salad sandwiches or to add a bit of protein to a saucepan of macaroni and cheese. I sacrificed two eggs that had been bought with the promise of a morning omelette or a fried egg sandwich; some bread crumbs and powdered tomato bouillon, both bought with the intention of making a crust for fried chicken or pork chops; and the bread, mayo, and sliced kosher dill pickle that had come home from the store as companions to a package of bologna. Even the puddle of vegetable oil I started preheating in the skillet, before doing anything else, was acquired with other things in mind - such as that fried chicken again.

All right, so I started preheating the skillet with some vegetable oil on it. Meanwhile, I spread the mayo on the bread, and arranged a couple pickle slices and half a slice of sharp cheddar on one side of each sandwich-to-be.

Next, I mixed some of the bread crumbs and a little of the tomato bouillon in the bowl, beat in two eggs, and added the canful of tuna, drained. (The cat enjoyed the tuna water in a saucer on the floor.) I started to think two eggs might have been one too many, because the tuna mixture was very thin; so I opened and drained the herring filets, then mangled them with the fork while stirring them into the mixture. I added a bit more of the bread crumbs to get closer to the consistency I wanted - basically, an oily, sticky mush.

I formed the mush into six balls, flattened them into disks a little smaller than my palm, and dropped them onto the hot, oily skillet. As they started to sizzle, it occurred to me that smoked herring should be called the bacon of the sea. It smelled that good.

I turned the patties after a while. When they were nicely brown on both sides, I took them off the heat. I wrapped up three patties for later and made sandwiches out of the other three. I recognized it would have been a good idea to melt the cheese right on the patties while they cooked, but it all ended up in the same place regardless.

At a certain point the thought crossed my mind, while I was scarfing down the second of my three sandwiches, "I'm not sure I'm going to have room for the third sandwich." Then I looked down at my plate and realized it was bare. I was already finishing my third sandwich. So I can verify that not only were they filling, but they were so absorbingly delicious that I lost a bit of time somewhere between the second and third sandwich.

So, there you have it. Bacon of the sea. Sandwiches. With cheese.
Posted by RobbieFish at 5:41 PM