Lilliput was just one of the places Lemuel Gulliver visited on his well-known travels. Even if you don't remember much about the other stops on his trip, it's very likely that if the title Gulliver's Travels means anything to you, you've heard of this island nation whose miniature people look up to us regular humans as we look up to giants. So imagine the terror six-moon-old Lily feels when Gulliver rears up out of the sea, making a return trip just to snatch her and bring her back to England as proof of his stories from his previous visit. She spends the next six months of her fairy-sized life in a birdcage, hatching 33 escape plans, none of which succeed. Meanwhile, Gulliver obsesses over the journal of his travels, which he hopes to finish soon so he can show Lily to the King of England and prove his story is one of scientific discovery, not madness or tomfoolery.

Then one day, a message Lily sneaked out of Gulliver's garret on the tail of a friendly mouse brings an answer. She finds a friend in the apprentice of the evil clockmaker who is also Gulliver's landlord. Forced to wear a wristwatch that tightens painfully after every wasted minute, Finn is not just Mr. Plinker's apprentice; he's a slave. But the two orphans help each other escape Mr. Plinker's vile clutches, experiencing wonderful and scary adventures together. Finally, they join a couple more colorful characters to plan Lily's escape back to Lilliput. But Mr. Plinker has also been making plans, plans that put Lily and all her friends in terrible danger.

An afterword to this book notes its place among a large body of "Gulliveriana" - basically, the oldest body of fan-fiction in English literature, dating back to 1726, the very year Jonathan Swift first published Gulliver's Travels. Considering that, plus the abiding impact of Swift's book on the shared imagination of western (or at least English-speaking) culture, and the fact that his title character was the first literary hero to wear spectacles, Gulliver blazed a trail for Harry Potter in many ways. But perhaps it is this book's origin as a tale a young man told his brother during a ramble along seaside cliffs that best explain its compelling drama, its fast-paced and exciting action, its winning combination of friendly and villainous characters, and its magical depiction of the tiniest of heroines prevailing against a gigantic and dangerous world. It's an unexpected sequel to Gulliver, but a wonderful little adventure in it own right. 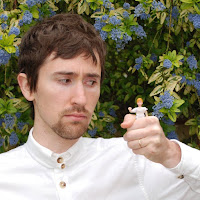 This was the second published book by the British author of Hercufleas, but his first to be released in the U.S. I snapped up a copy of the edition illustrated by Alice Ratterree as soon as I spotted it in the children's fiction section of my local public library, and was richly rewarded for the time I spent reading it. Piecing together snippets I have read about the author in both of his books that I have read, and on his website, he is keen on stories about miniature people, and he has a master's degree in writing fiction for children - the first I have heard such a degree exists. Gayton's other books include The Snow Merchant, published in the U.S. as The Adventures of Lettie Peppercorn, and His Royal Whiskers.
Posted by RobbieFish at 5:03 PM