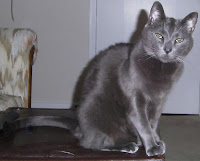 This buddy of mine, age 14, was euthanized today. He was apparently suffering some kind of thyroid condition. He drank a lot of water, had patches of scaly skin and weird growths on his body, was losing muscle tone and bladder control, and was acting increasingly weird. After more than a week of having to mop urine puddles off the floor near his litter box at least once a day, I took him to the vet and said goodbye.

The last time I lost a pet was in the early days of this blog, in October 2007, when Tyrone's pal Lionel, then 5, met his maker. Lionel's malady was a type of cancer that produced a large mass visible under the fur on his side, possibly a side-effect of a certain rabies vaccine he received early in his life.

I adopted both Tyrone and Lionel in August 2002 from the Yuma County Humane Society in Yuma, Ariz. Tyrone came home first, but I quickly decided I wanted a playmate for him and went back for Lionel.

Actually I visited the humane society three times. The first time, when I wasn't sure whether I wanted a dog or a cat, I looked at some of each. It was only when I saw a little charcoal-gray kitten with big green eyes, and I knew he was going to break my heart someday, because he had it. He wasn't old enough to be adopted that day. I noted down the date when he would become eligible for adoption, and was waiting outside the humane society when it opened on that date, to make sure nobody else got him before I did. I already knew his name was going to be Tyrone, because it was the first name that made me laugh when I was thinking about what to call him.

I think I saw Lionel on that second visit, or a cat just like him - an orange tabby who got his name pretty much the same way. As when I had Lionel put down, I stayed with Tyrone until the end. Unlike with Lionel, I haven't cried yet. I guess the "never again" factor hasn't really hit me yet.

The never-agains are significant, though. Tyrone was a very affectionate feline friend. He used to greet me at the door every day when I came home from work, climbing up on the nearest piece of furniture and stretching to put his paws on my chest and his nose to my lips in what was either a kitty kiss, or a surreptitious attempt to smell what I'd had for lunch. He was the cat who gave me face-bumps, who would let me pick him up and hold him, who would snuggle close and purr and grip my shoulder with his forepaws, who was infinitely patient with my funny little way of playing with his tail (which I always thought was one of his best features), who would throw himself down against my leg with a whap and press hard against me.

He was also a fun, playful pet. As a kitten, I thought he resembled a little monkey, scampering around, leaping and dancing under the type of toy that I would dangle over him on a stick or a length of wire, and chasing balls with jingle-bells in them like a professional soccer player. He always wanted to shoot the balls under pieces of furniture from which I could only extract them by shoving a broomstick after them. Sometimes he would play attack forward around me while I tried to defend the goal.

He was a cat who appreciated music. When I played the piano, he was always right there, spending three-fourths of the time sitting next to me on the bench, watching my fingers press the keys, and only one-fourth of the time walking on the console between my eyes and the musical score.

He was a cat with a marvelous repertoire of vocalizations, from the throaty click that meant, "Hey, bird outside the window! I want to have you for lunch!" to the chirps and trills that seemed to mean "Alley-oop!" or "Uff da!" as he jumped on and off pieces of furniture. He had a tone of meow that I learned to recognize as "Give me a treat right now!" and that was not to be denied if I valued my sanity.

Tyrone was a linguistic researcher. He once used his meow to explore the acoustics of the inside of a Kleenex box, in which his head became stuck. I think one of his meows, translated by my subconscious mind during a recent early-morning dream, may have been the reason I awoke thinking I had heard a voice in the next room calling my first name. Some of his meows have, at times, actually sounded like he was trying to say "Robin." Usually, those seemed to be the meows of a cat looking at his food dish and saying to himself, "Is this really all there is?" At other times, I thought he and Sinead (Lionel's longhair calico successor) were meowing at each other in complete sentences, apparently having a conversation, albeit in no language I understood. These exchanges usually ended with a snarling, pushing, punching fight.

Tyrone was a helpful cat. I will miss having his assistance changing the sheets on my bed - an occasion on which, throughout the last 14 years, I have invariably told him, "How would I do this without your help?" Unless Sinead steps up, I'm about to find out. Tyrone was also a gas during laundry sorting.

He was a good cat for sensing my feelings and responding to them. When I felt really down, he became especially cuddly, or would look at me with concerned eyes.

Everyone who met him, up to the last year of his life, commented on what a beautiful cat he was. He had a fine glossy coat, a well-shaped physique, a handsome face, and a very faint pattern of tabby markings that only showed up in certain lighting. His whiskers, his ears, his eyes, his grippy forepaws, and his tail (which I always secretly envied) are going to be missed.

Toward the end of his life, Tyrone hardly ever moved off the top of the piano, except to eat, use the litter box, or snuggle with me on the couch. It was as if he had an aversion to the paw-feel of the living room floor. His sphere of activity grew smaller and his activities themselves became more repetitive and annoying. I started to entertain thoughts about kitty dementia. I knew the end was near when he actually peed on me one evening. But the decision actually came over Labor Day Weekend, by which time the cat-pee-missing-the-litter-box thing had upgraded from "occasionally" to "daily."

I don't plan on adopting another kitten to replace Tyrone, as I did after Lionel died. I realized something I had forgotten when I adopted Sinead - that I don't really enjoy living with a kitten. I remember now telling Tyrone and Lionel that I thought they were great, but I couldn't wait until they were grown-up cats and we could enjoy each other's adult company. But that knowledge seems to have hidden itself during my grief for Lionel, with the result that I went through the ordeal of needle-like claws, and having to keep two cats away from each other's food dishes, and all the other mischief whereof a kitten is the fuzzy yet excruciatingly definite embodiment.

Until recently, I never felt as close to Sinead as I had felt toward Lionel and Tyrone. Lately, as if by instinct, she has begun to compensate for the distance growing between me and Tyrone. During the last several weeks, Sinead has hardly left my bed at night, always moving to whichever side I am facing and cuddling against my chest. She's going to be a good comfort, I think. And if her health remains good, I could expect to enjoy her company for another decade or so. By that point I'll probably be grown-up enough to be responsible for a dog, if I want to keep having pets.

It's nice not to live alone. I had no one at home from the time I graduated from the seminary until I found Tyrone. I met him very shortly after the beginning of his life, and I enjoyed knowing him until the very end. I don't expect to meet him again; I have no illusions about that. But I am thankful for the company he has been, and I am glad that his discomfort is over.
Posted by RobbieFish at 12:14 PM