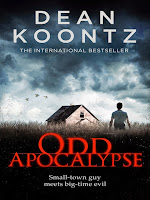 In the sixth Odd Thomas novel, a young fry cook who sees dead people continues his sabbatical from the spatula and grill. As in his previous two adventures, he finds trouble brewing in a misnamed California coastal town. In Odd Hours it was Magic Beach, where practically everything in town is named contrary to its nature, where premonitions of nuclear disaster forced him into the role of avenging angel, and where he was joined in his travels by a mysterious pregnant girl named Annamaria. In Odd Interlude, the town was Harmony Corners, where Annamaria memorably pointed out that there was no harmony, and where an entire clan lived as slaves of a psychic puppet-master with E.T. D.N.A. Now Odd finds himself in the guest tower of a country estate called Roseland, where there are no roses, and something (by any other name) smelleth rotten. He senses that it may be the most evil place he has ever visited. He wants to leave immediately. But Annamaria tells him that someone at Roseland needs to be saved, and only Odd can do it.

As Odd finds things out by his usual, paranormal method of "making it up as he goes along," there really is something weird going on at Roseland. What at first seems to be prophetic visions, or tricks of the light, seem more and more to be side-effects of the strange architecture of the estate, and of the machinery that runs silently within the walls. Built in the 1920s by a movie-industry mogul, the place is full of secrets, suspicious staff members, disturbing noises in the night, and ghostly apparitions that are strange even by Odd's standards. One of them belongs to a woman on horseback who indicates, by frantic signs, that her young son is in danger—though there haven't been horses at Roseland for decades. Another apparition, whom Odd eventually identifies as scientific genius Nikola Tesla, actually speaks out loud—something that, in Odd's experience, ghosts never do.

But even these oddities are nothing compared to those moments when the sky goes yellow, and morning suddenly turns into evening, and gangs of bipedal swine prowl the grounds in search of prey, and giant vampire bats darken the sky. Moments in time from the far future, perhaps the end of the world, push their way into the present. And behind every door on the Roseland grounds is something ghastly, strange, or downright impossible. By the time Odd puzzles together what is happening at Roseland, nearly everyone else there is hunting for him with deadly intent. What he fears above all is that he must become a scourge of cosmic justice—a role that must end with him, in turn, being scourged. Odd senses that his calling, to save the innocent from great evil, puts him in supreme danger—not merely of dying, for he does not fear death; but of becoming a sort of holy hit-man, to kill and kill and kill until his soul is consumed. And that would mean not enjoying his fondly awaited eternity together with his dearly missed Stormy.

Odd must be a remarkable hero, if in spite of the grisly horrors and reality-twisting oddities he encounters in this book, and the all but certain death that threatens him around every corner, the danger that concerns him most—and that will concern you, too—is a danger to his soul. But he is exactly that sort of hero, regardless. A gentle, softspoken, humble hero who comes across to many people as a halfwit, yet who is amazingly resourceful, insightful, and philosophical. A guy who hates guns and loves life, yet who regularly demonstrates the ability to apply just the right amount of deadly force at just the right time. As his strange pilgrimage continues, his entourage of companions—including dogs, ghosts, and living people—grows in both number and unusualness. His wanderings continually lead him into darker and more bizarre encounters with the evil within the heart of man, with a different supernatural twist each time. Yet he never loses faith in the existence of a "sacred vertical order," and the hope of good things to come. It's a unique thread in the tapestry of horror-fantasy. And it continues for at least four more books after this. The next title in the sequence is In Odd We Trust.
Posted by RobbieFish at 5:37 PM